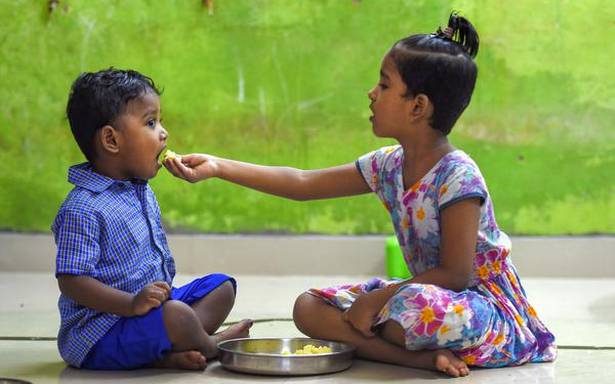 The Centre has rebranded the 26-year old national mid-day meal scheme to give a hot cooked meal to 11.8 crore government school students from Class 1 to 8, with the Cabinet approving a proposal to rename it as the PM POSHAN (Poshan Shakti Nirman) scheme on September 29.

From the next financial year, it will also cover the 24 lakh children studying in balvatikas, the pre-primary section of government schools, Education Ministry officials said.

Although this year’s budget for mid-day meals remains unchanged, an additional ₹266 crore is expected to be added as the Central government’s share to cater to balvatika students from 2022-23, Education Minister Dharmendra Pradhan told journalists after the Cabinet decision.

The extension of mid-day meals to pre-primary students, who are to be incorporated into the formal education system, was a key recommendation of the National Education Policy 2020 and the population of balvatikas — which offer one year of pre-school classes — is expected to rise from the existing 24 lakh as the policy is implemented.

However, there has been no progress on the NEP’s other recommendation to start offering breakfasts to school students as well. Mr. Pradhan declined to comment on the issue, but Ministry officials have previously told The Hindu that the Finance Ministry vetoed the proposal for this year, which would involve an additional budgetary allocation of ₹4,000 crore, due to a severe funding crunch. In fact, the School Education Department’s budget for this year has been cut by almost ₹5,000 crore.

The PM POSHAN scheme has been approved for the next five-year period until 2025-26, with a collective outlay of ₹1.31 lakh crore, including ₹31,733 crore as the share to be borne by the State governments. It will “improve nutritional status, encourage education and learning and increase enrolments in government schools”, Mr. Pradhan said.

The rebranded scheme aims to focus on “holistic nutrition” goals, Ministry officials said, adding that a 5% flexi component would be built into the existing budget to allow States to incorporate additional nutrition-rich elements — such as fortified foods, fruits and milk — into the menu. Use of locally grown traditional foods will be encouraged, along with school nutrition gardens.

Social audits have been made mandatory in all districts and college students and trainee teachers will be roped in to do field inspections to ensure the quality of meals.

In other procedural changes meant to promote transparency and reduce leakages, States will be asked to do direct benefit cash transfers of cooking costs to individual school accounts, and honorarium amounts to the bank accounts of cooks and helpers. However, the rebranded scheme does not include any progress on the long-pending demand of cooks to increase the ₹600 allocated by the Centre as their monthly honorarium. “If States wish to give a top-up, they can do so,” said Mr. Pradhan.