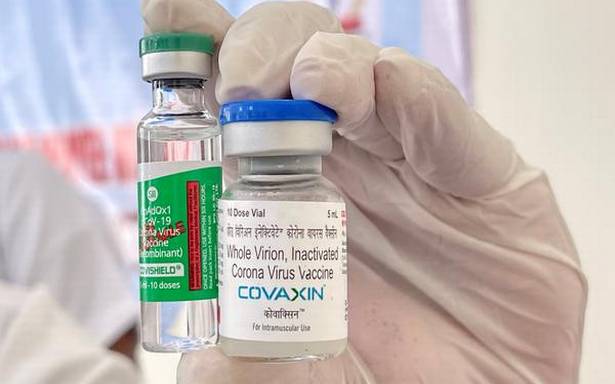 The Centre has placed fresh orders for 44 crore vaccine doses of Covishield and Covaxin which will be available from August-December. It has also placed an order for 30 crore doses of a vaccine from Hyderabad-based Biological E for its in-development protein subunit vaccine.

“All together 74 crore doses have been secured for use from August onwards,” Dr. V.K. Paul, Chairman, National Empowered Group on Vaccination, said at a press conference on Tuesday.

Until July, 53 crore vaccine doses — including 23.5 crore already administered — were expected from the two manufacturers Serum Institute of India and Bharat Biotech.

If all the estimates were to come to fruition, it would mean 127 crore doses could be available, enough to ensure India’s estimated population of about 94 crore gets one dose of a vaccine.

However, a lot of it depends on the speed at which vaccines are disbursed. After a lacklustre May that saw vaccine stocks and immunisation plummet, the number of daily doses have started to rise after May 29, touching over 30 lakh on several days. To be able to administer at least a single dose to all adults by December, over 9 crore people need to be inoculated per month.

The government has earmarked ₹35,000 crore towards vaccine procurement. Until May 28, it had ordered 28.5 crore doses for ₹4,488 crore according to data from the Health Ministry.

Biological E said it had got permission from India’s Drug Controller on April 24 to begin phase-3 trials in India.

The Phase III clinical study to be conducted in 15 sites across India would evaluate the extent and nature of immunity and safety of Biological E’s SARS-CoV-2 COVID-19 vaccine in about 1,268 healthy subjects in the age range of 18 to 80 years. It is intended to be part of a larger global Phase III study, the company said in a statement.

Biological E has successfully concluded the Phase I/II trials of the vaccine candidate, which began in India in November last year. Data from the Phase I/II trial suggested that the Covid-19 vaccine was “safe, well-tolerated, and immunogenic,” according to a company statement.