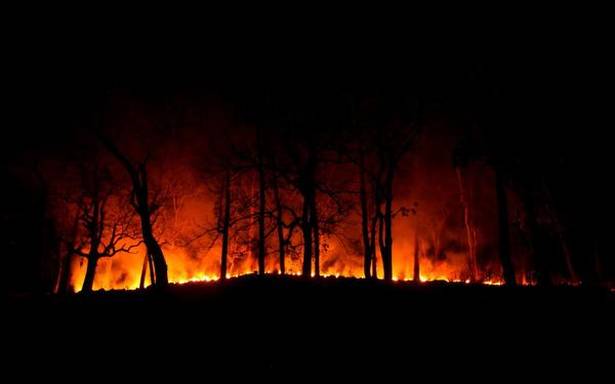 Union Minister Javadeklar says he will monitor the situation

The Centre has deputed a three-member team to help the Odisha government tackle the forest fires in Simlipal.

The experts will advise on containing the fires, assessing their geographical extent and how many fires are ongoing and determining their impact on wildlife, forest resources and whether they are in anyway linked to poaching.

Union Environment Minister Prakash Javadekar tweeted on Wednesday that he had met a delegation of Ministers from Odisha. He said that apart from the team, he himself would be monitoring the state of fires every day.

The Simlipal forest reserve area frequently sees forest fires during dry weather conditions. A warm February with above average temperatures and dry vegetation fuelled the fires this year, according to preliminary observations from experts.

The region was declared a biosphere reserve in 2004 and is home to orchids, amphibians, reptiles, mammals and birds. Forest inhabitants also set fires to clear dry leaves to ease collecting the manual flowers, an important forest produce.