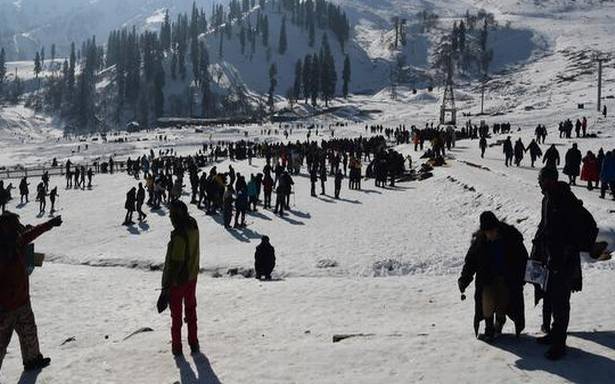 Tourism trends are healthy and bookings are continuing, says official

This December, the buzz on the famous Boulevard Road around the Dal lake in Srinagar saw an unprecedented scale, even after the sundown with the freezing temperatures engulfing the place, while most high-end hotels in Gulmarg and Pahalgam put up the ‘sold out’ tags online.

The reason behind the busy streets here is that Kashmir, for the first time in over a decade, hosted over 2.5 lakh tourists in only two months of November and December, running most high-end hotels in tourist hotspots of Gulmarg and Pahalgam full.

“Tourist footfall has been between 3,500 and 5,500 per day in the past two months. We recorded 1.27 lakh tourists in November, highest in the past one decade. The combined tourist figures of November-December are good omen for Kashmir’s tourism. Tourism trends are healthy and bookings too are continuing,” a senior tourism official said.

Compared to 4.1 lakh tourist footfall last year in the midst of the pandemic spell, Kashmir has crossed the six-lakh mark already this year as the foreign shores continue to remain out of bounds for upper middle class prospective tourists in mainland India.

“Our hotels in Gulmarg and Pahalgam were sold out for the month of December. We are expecting healthy bookings for the coming months of January and February too. It’s rare that Pahalgam is also getting a healthy footfall this winter against Gulmarg, which otherwise had remained a preferred destination in winters,” Asif Iqbal Burza, who runs a chain of hotels in the Valley, told The Hindu.

Mr. Burza said one of the key reasons for tourists preferring Kashmir despite the pandemic is “higher levels of vaccination and lower trend of COVID-19 cases.”

“The Tourism department has treated workers associated with the hospitality business as the second preference after front line workers for vaccination. It did help in infusing confidence among those who visit us,” Mr. Burza said.

Pahalgam, around 90 km south of Srinagar, wears a festive look due to the illuminations, as the New Year approaches. The Jammu and Kashmir Tourism department has booked Rohanpreet Singh, a singer from Punjab and husband of popular performer Neha Kakar, to entertain the tourists on the eve of New Year.

In Gulmarg, which received fresh snowfall around Christmas, the ski slopes are full with domestic tourists. Officials said all 1,300 rooms in Gulmarg were booked for January too.

Komal, a resident of Gujarat, is part of a five-member all-women group and practices six hours a day on the ski slopes. “We have registered with the Indian Institute of Skiing and Mountaineering, Gulmarg, for a skiing course. Two of our group members are eight-year-old and nine-year-old. It feels like heaven learning skiing on these slopes,” Ms. Komal said.

Buoyed by the growing footfall of tourists, Sonamarg, which would remain closed during winters due to heavy snowfall, will also be made accessible this winter, as the government is working hard to complete the Z- Morh tunnel, which bypasses the snow-filled route to touch the tourist destination.

The fresh push to complete the Z-Morh tunnel comes in the wake of the recent statement of Lieutenant Governor Manoj Sinha who said, “I get three to four calls from people and friends to arrange hotels for them as all hotels are booked in Kashmir”.

In a speech made on December 27, Mr. Sinha said there was a need to have more hotels and guest houses in Kashmir to accommodate more tourists.