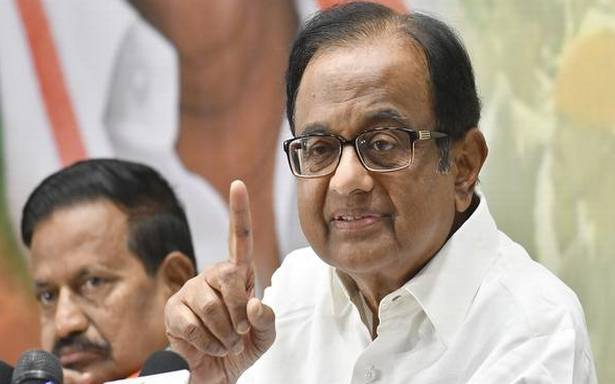 Veteran Congress leader P. Chidambaram on Friday questioned the NDA government’s centralised system of decision-making during the COVID-19 pandemic, which he said had exposed “gaping loopholes” in the political system. The pandemic had also thrown up an unusual phenomenon of “vaccine nationalism”, he said.

Addressing a seminar on “Global pandemic and challenges before democracy” in the State Assembly here, Mr. Chidambaram said there was a question mark on the Indian democracy’s response to the challenge in order to protect the lives, livelihood and well-being of the people, especially the poor.

“What the pandemic has done is to expose the gaping loopholes in the boasts. In a true parliamentary democratic system, the Prime Minister is responsible every day to the Parliament and to the people. In a corroded [and] diminished democracy, the rulers will find diverse ways to evade accountability,” Mr. Chidambaram said.

The former Finance Minister said the energy of rulers was focused on self-preservation, rather than on fighting the pandemic, when the rule of law was subverted with the weakening of government institutions.

Mr. Chidambaram listed the challenges thrown up by the pandemic and affirmed that the governments at the Centre and in the States had found no answer to the catastrophe and stood by as “helpless spectators”. The perils of centralisation were reflected in resource allocation, widening of disparities and subversion of the rule of law, he said.

Assembly Speaker C.P. Joshi, Rajya Sabha MP Vinay Prabhakar Sahasrabuddhe and Leader of Opposition in the Assembly Gulab Chand Kataria also addressed the seminar, which was organised under the banner of Rajasthan chapter of the Commonwealth Parliamentary Association.