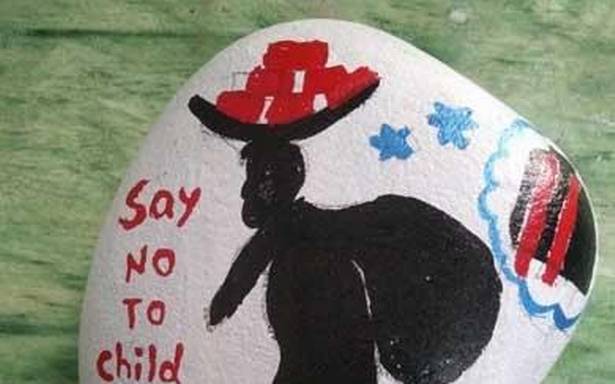 Since the last eight months, 12-year-old Karan from Parbhani district in Marathawada region of Maharashtra wakes up at sunrise and for the next eight hours lugs bricks and cement to earn not more than ₹300 per day. Karan does this to help his mother Shanta, 56, after COVID-19 pandemic forced his municipal school to shut down. Karan like most of the kids of his age loved attending school and was keen to learn geography. “I want to learn everything about all the places in the world, and then go see them,” said Karan who now has no clue when his school would start.

Monali and Gaurav, will turn adults after six years and dream of becoming an air hostess and a pilot, but been working at a grocery store at Bhiwandi city in Thane district since the last eight months after their father died due to COVID-19, and their mother lost her livelihood after a beauty parlour she worked in shut shop. “We have seen days when we did not have any money to even buy grains. That is when my mother asked Gaurav and me to work,” said Monali who along with her brother and others were rescued by Catalysts for Social Action, a child welfare organization. They were produced before the Child Welfare Committee who then sent them to childcare homes David Sassoon for boys and Sneh Sadan for girls.

Similar, is the story of 13-year-old Salma and 14-year-old Nasreen who work as domestic helps for a salary of ₹2,500 each or that of nine-year-old Ishan who sells potatoes and onions with his father on the street and also deliver them to people’s homes. He says, “I also attend school through my phone and don’t mind helping my father in the evenings.” When asked what he wants to become when he grows up, he said, “I don’t know now, I will know that only when I am fully grown up. I am just a child now.” The instances of these minors are just a tip of the huge number of children who were directly or indirectly forced into child labour, a phenomenon many believes has increased during the COVID-19 pandemic.

“The pandemic has resulted in economic insecurity in households either due to the death of earning members, increasing debts, loss of work, or reduced employment opportunities – especially for marginalised communities. This has left children particularly vulnerable and increasingly we will see children entering into manual or unskilled labour to supplement the family income. Add to this troubling situation the closure of schools that have kept children away from education for more than a year now, and the scenario would be further aggravated once the schools open and we would have to face huge drop outs,” said Kreeanne Rabadi, Regional Director, Child Rights and You – West.

Vaishali Pawar, who works for Pratham, an NGO working to provide education for the underprivileged said, “Many families from lower income groups send their children to school. But after schools shut down in the pandemic, many cannot afford smart phones or to recharge the mobile phones, so the children miss out on classes. Some schools are also not conducting online classes. This makes the parents prefer to send their children out to earn some money.” Many children from vulnerable families have taken up domestic work, said Ms. Pawar.

“And since in a city like Mumbai where restaurants and factories are shut, children who lost their parents to COVID have taken up the same job what their parent used to do. Like becoming a vegetable or fruit vendor or a cobbler or sweeper,” she said.

UNICEF in the report ‘Rapid Assessment of Learning During School Closures In The Context of Covid’ states, “Due to the pandemic, schools across India were closed impacting approximately 286 million students (48% girls) from pre-primary to upper secondary education. This is in addition to the more than six million children (48% girls) who were already out of school prior to the COVID-19 crisis. Only 60% of students have used any remote learning resources; and even among those, nearly 80% report that they are learning less or significantly less than in school.”

And consider that the Labour and Employment Ministry in 2016 estimated that children constituted approximately 20% to 25% of the over 100 million migrant work force in India.

A global report by International Labour Organisation (ILO) and United Nations Children’s Fund (UNICEF) on Child Labour released on June 10 indicates that 160 million children – 63 million girls and 97 million boys – were in child labour globally at the beginning of 2020, accounting for almost 1 in 10 of all children worldwide. Seventy-nine million children – nearly half of all those in child labour – were in hazardous work that directly endangers their health, safety and moral development.

Nobel Peace Laureate Kailash Satyarthi said, “I am anguished and ashamed about the first increase in child labour in two decades. There can be no excuse for this. During the same four years preceding the pandemic, the world got richer by $10 trillion. Yet, child labour rose to 160 million. How rich does the world have to be to stop slavery and exploitation of our children?”

On the eve of the G7 Summit, this appalling rise in child labour poses the strongest moral challenge to our world leaders, said Mr Satyarthi adding, “We cannot conduct business as usual. We need bold and urgent action. It is time we set up a Global Social Protection Fund, with a direct focus on marginalized children. The pandemic will push millions more into child labour. We cannot leave the poorest children of the world fend for themselves in this crisis.”

Atul Desai, a child rights activist from Kohlapur in Maharashtra, said, “From October 2020 to March 2021, we have seen 12,000 children from the age of 6-14 years old come to Kolhapur from Marathwada region for cutting sugarcane. This is the migratory season and happens every year. But this year we have seen an increase in the number of children as schools is closed due to the lockdown.”

Most reports including UNICEF’s point out agriculture as the preferred sector for child labour. Farida Lambey, founder of Pratham, said, “There has been a direct impact of COVID on children. Schools are closed for one and a half year and they won’t be reopening anytime soon. Hence the rate of school dropouts is very high. As a result there will be a burden on open schools. For girls who are 14 years and above, parents in rural India say they don’t need to study and get them married. Since construction sites and hotels are closed, there is an increase of children working as domestic helps and in the agricultural field.”

Santosh Shinde, child rights activist there has been an increase in the number of child labour cases and said it is easy to deploy children they don’t bargain or form Unions. He said, “There are no rules, regulations, resolutions made by the government to protect children. The Child Labour (Prohibition and Regulation) Act was brought out in 1986 and was amended in 2016 however there has been no conviction of owners or businessman employing children to work for them.” He said, “Children who are 14 years and above have been working at sets of television shows and movies during the pandemic. But you will not see a single disclaimer or mention before the film starts saying no child was hurt or they are against child labour.”

“This World Day (June 12) against Child Labour is a wake-up call. We owe our children their fair share in financial resources, policies and social protection. Our children need us now more than ever before. We must not leave them behind,” added Mr. Satyarthi.