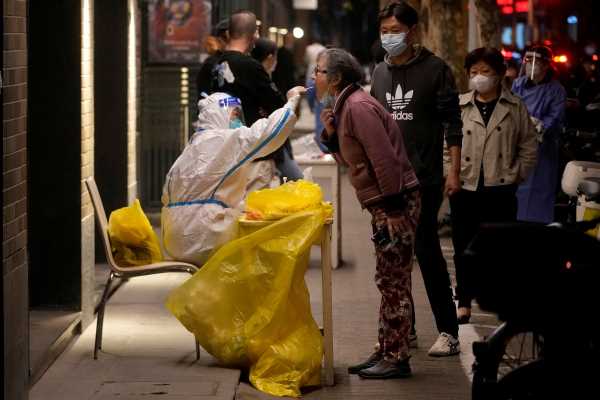 A rare protest against Chinese President Xi Jinping and his government’s rigid zero-COVID policy took place in Beijing, days before he is expected to be handed an unprecedented third term in office at a landmark meeting of the ruling Communist Party.

Photos circulating in social media on Thursday showed two banners hung on an overpass of a major thoroughfare in the northwest of the Chinese capital, protesting against Xi’s unpopular zero-COVID policy and authoritarian rule.

Unfazed by the rare protests, China on Thursday ruled out a rollback of the zero-COVID policy, saying no timeline can be fixed over the restrictions to fight the deadly pandemic, amidst growing frustration over the damage it is inflicting on jobs, businesses, economy and public life.

China has no timeline for an exit from its COVID strategy, a senior government advisor heading an expert panel bluntly said over the state-run CCTV, dashing hopes that the 20th Congress of the ruling Communist Party of China beginning in Beijing on October 16 may modify or reverse the tough policy.

Liang Wannian, who heads China’s expert panel on COVID-19, said, “it’s not scientifically possible to clearly delineate” while acknowledging public expectations of the rollback of the policy ahead of the Congress, which was widely expected to confer a third term to the President Xi, who is an ardent advocate of the zero-COVID policy.

“We have been working to beat the pandemic but at this stage, from a scientific point of view, it is difficult to say definitively in which month we will have reached this standard,” he was quoted as saying by the Hong Kong-based South China Morning Post on Thursday.

Banners displayed on a bridge in the district of Haidian, home to universities and tech firms in Beijing, read “Food, not COVID test”; “Reform, not a Cultural Revolution”; “Freedom, not lockdowns”; “Votes, not a leader. Dignity, not lies. Citizens, not slaves” etc.

The banners appeared to have rattled officials in China — where political protest is rare – as they hurriedly deployed police on numerous over bridges in Beijing to ensure that the protests are not spread, while mobile patrolling has been intensified in the city.

Gauging the public resentment, the CPC mouthpiece People’s Daily came strongly in support of the zero-COVID policy and accused those of “lying flat.”

“If there is a large-scale COVID-19 resurgence, the spread of the epidemic will have a serious impact on economic and social development, and the final cost will be higher and the loss will be greater,” one of the commentaries in the daily said.

Xi, 69, too said in recent times that China witnessed fewer deaths due to the zero-COVID policy unlike in the rest of the world.

The coronavirus, which first surfaced in Wuhan towards the end of 2019 before it spread to the world causing death and devastation, has become the Achilles heel of the Chinese economy resulting in its worst slowdown due to persistent lockdowns of top cities in the country.

A new Hazmat suit-wearing police and health officials have become a common sight all over China.

Public resentment is brewing as the slowdown is resulting in job losses. According to recent data, China’s unemployment rate grew to about19 per cent, the highest in recent years.

While China claims to have vaccinated the best part of the population, officials complain of vulnerable groups like people above 60 years who are a cause of concern.

In almost all cities, especially in Beijing, people have to undergo testing for COVID on alternative days without which they cannot enter public buildings, restaurants, transport services or even taxis.

Under the zero-COVID policy, travel and transportation services within China and its connectivity to the world are hit hard.

So much so that most of China’s massive infrastructure including its once most busy airports is currently wearing a deserted look.