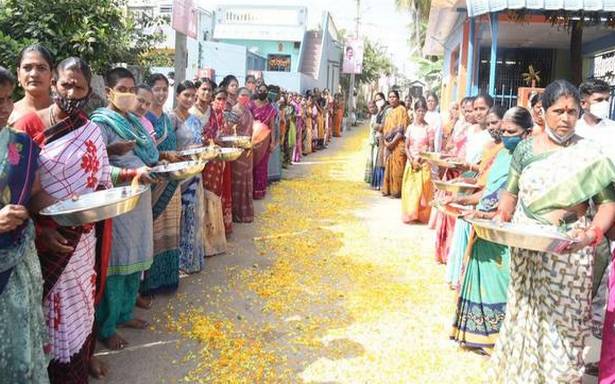 Chittoor district on Wednesday showed a sudden spike in the number of COVID cases with 68 new infections, a jump from 13 on January 3, including 41 from Tirupati municipal corporation limits.

The medical and health department officials attributed the development to the public congregations in the last week.

Despite the rising infections, COVID-appropriate behaviour was largely missing at public places all over Chittoor district, with no surveillance on public transport and gatherings.

The number of infections is likely to go up in the coming weeks, after Vaikunta Ekadasi and Sankranti festivities.

District Medical and Health Officer U. Sree Hari said that going by the upward projection of the COVID graph in the other States and in Chittoor district, it could be perceived that the number of infections was on the rise.

“At present, we have two COVID Care Centres, one at Vishnu Nivasam in Tirupati and another at RVS College in Chittoor. An action plan to suit the emerging trend would be ready shortly after a meeting with the District Collector,” the DM&HO added.

Referring to the inoculation of children aged between 15 and 18, Dr. Sree Hari said that the three-day drive was largely successful with reaching a 58% target out of 2.10 lakh. “The drive will continue till Saturday to inoculate the maximum number of the target group,” the official said.