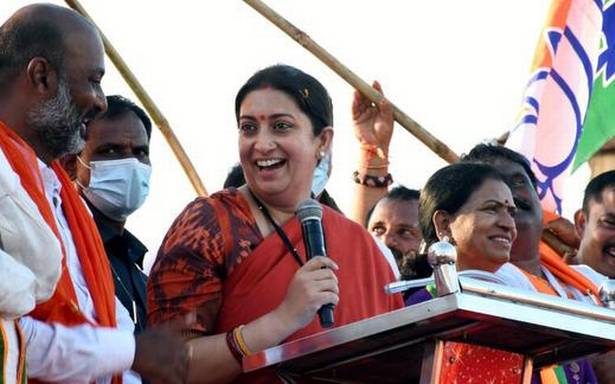 State BJP chief Bandi Sanjay Kumar concluded the first phase of his Praja Sangrama Yatra on Saturday. He said that the BJP has been working for the Hindus and he had no hesitation in saying that.

“Which government do you want? Rama Rajyam by BJP? Rajakarla Rajyam by TRS or Taliban Rajyam by MIM? Chief Minister K. Chandrasekhar Rao spoke of Hindu Gallu Bondu Gallu and if we do not react, we will remain Bondu Gallu? Are you ready for that?” asked Mr. Sanjay Kumar, while addressing a meeting at Husnabad.

He wanted to know whether it was wrong to speak about Hindus and asked the people to respond. He said that the people of Karimnagar taught a lesson to the TRS.

“We embarked on Praja Sangrama Yatra to know the public pulse and their wishes will be the base for our agenda in the next elections. We will come to power without any doubt,” said the BJP leader.

“Can we forget the Bhainsa incident? We have organised a meeting at Nirmal. We held a meeting at Bhagyalakshmi temple and will hold a meeting at any place. Our workers are ready for any sacrifice. People are telling that they would give power to BJP. Though TRS, Congress and MIM are trying to defame the BJP, people are not ready to believe it. The first signature by a BJP Chief Minister after coming to power will be on free healthcare and education,” he said.

Union Minister for Women and Child Development Smriti Irani participated in the road show along with Mr. Sanjay Kumar. She alleged that corruption has become rampant in the State and appointments were confined only to the family of KCR whereas the unemployed were sulking. “KCR is scared of MIM and therefore, not celebrating September 17 as Telangana Liberation Day. When TRS steering is in the hands of MIM, how can it work for the common people?” she asked, adding that there was a great response from public.

Meanwhile, former Minister Eatala Rajender said that people of Huzurabad are with the BJP. BJP Floor leader in Assembly Raja Singh, OBC national wing president K. Laxman and others participated in the meeting.