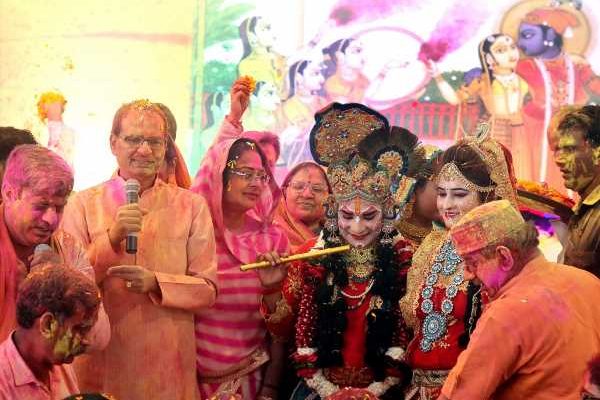 This year’s Holi is special for Madhya Pradesh Chief Minister Shivraj Singh Chouhan as he has achieved the distinction of being the longest-serving BJP chief minister.

On Thursday, he broke a record which had been held by former Chhattisgarh chief minister Raman Singh.

While Raman Singh, who was chief minister for three consecutive terms, remained in the post for fifteen years and ten days, 63-year-old Chouhan has now surpassed him.

The Madhya Pradesh CM’s tenure, however, has not been unbroken: he was out of power for fifteen months as Congress formed government under Kamal Nath’s leadership after the 2018 Assembly polls.

As far as Madhya Pradesh is concerned, Chouhan has another record under his belt.

On November 19, 2015, when he completed ten years in office, he became the first non-Congress chief minister of the state to do so.

Then he went on to become the longest-serving chief minister of MP by breaking the record of Congress veteran Digvijaya Singh who had ruled from 1993 to 2003.

Chouhan became chief minister for the first time on November 29, 2005, after BJP leaders Uma Bharti and Babulal Gaur had to step down in a span of two years following controversies.

He quickly consolidated his position and led the party to victories in 2008 and 2013 Assembly elections.

But in the next election, the BJP fell short of the majority mark by a whisker and Chouhan resigned on December 12, 2018, making way for Congress’ Kamal Nath.

Nath, however, had to step down on March 20, 2020, after his government was reduced to minority as Jyotiraditya Scindia quit Congress and his loyalist MLAs resigned.

At present he seems to be firmly in saddle, but whether he will lead the party in 2023 elections is an open question as a rival has emerged in the shape of Union Civil Aviation Minister Scindia.

Chouhan celebrated Holi on Friday at his official residence here, greeting people with his wife Sadhana by his side.

The chief minister smeared ‘gulal’ colour on visitors’ faces and was also seen dancing and singing Holi songs. He also planted a sapling at the Smart City Park.