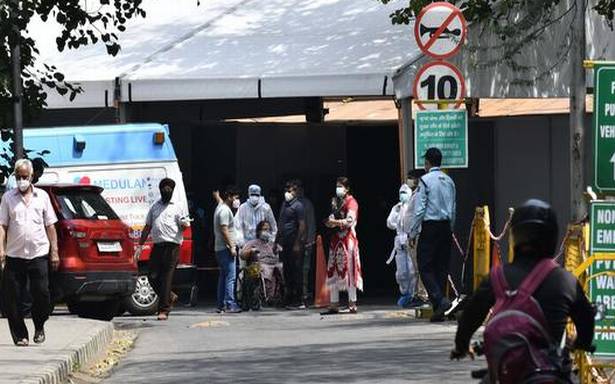 “Everything was fine until a week ago, but today my younger brother is no more. We could not save him. He was only in his 40s. How could this happen to him? Everything is over now,” said Varun, a city resident, while breaking down outside the emergency wing of Max Hospital, Saket.

Since the last four days, Mr. Varun, like many others, had been hoping for a miracle, he said. “What do I tell my parents now? How do I break the news to them,” he asked.

From frantic calls to visiting multiple hospitals in search of ICU beds to being inconsolable when informed about a death, the day was spent between hope and despair for those waiting outside the emergency wings of some of the city hospitals.

At Moolchand Hospital, while some were seen desperately waiting for ICU beds even after being refused by the hospital administration, several others waited patiently amid reports of oxygen shortage even as their relatives fought for their lives inside.

Waiting outside the hospital at 4 p.m., a Mangolpuri resident, Vinod Kumar said that he had lost count of the number of hospitals he had visited since morning.

“We need an ICU bed for my aunt who is 54 years old. She has been admitted to ESI Hospital in Okhla but we were told in the morning to shift her out as the hospital did not have a vacant ICU bed. We literally begged them not to discharge her till we found an alternative,” said Mr. Kumar.

Stating that he had visited hospitals in Paschim Vihar to Rohini, Mr. Kumar said, “We have been on the road since morning. At Rohini, Saroj Hospital is in a bad shape themselves so they could not help us. We have been waiting at Moolchand for half an hour even though they have told us that there is no vacancy. We were given a phone number but nobody is taking the call. We are at a loss.”

With his 41-year-old wife in the ICU, Mohan Singh, a resident of a nearby colony, has spent days waiting outside the emergency wing of the hospital.

“At the time of admission, her oxygen saturation had dropped to 50. She was kept in the emergency on the first day as there were no vacancies and was later shifted to the ICU. It is not possible for me to make multiple trips to the hospital, so I simply wait here the whole day and check up from time to time,” said Mr. Singh.

At a time when acute oxygen shortage was being reported across the Capital, Mr. Singh said that for relatives of the patients it was an emotion “beyond words”.

“I can’t even begin to explain the level of tension that there is. It is painful. But thankfully, this hospital has been managing somehow and so far my wife did not have face any issues with regard to oxygen supply. We can only hope that they have enough supply for their patients,” said Mr. Singh.