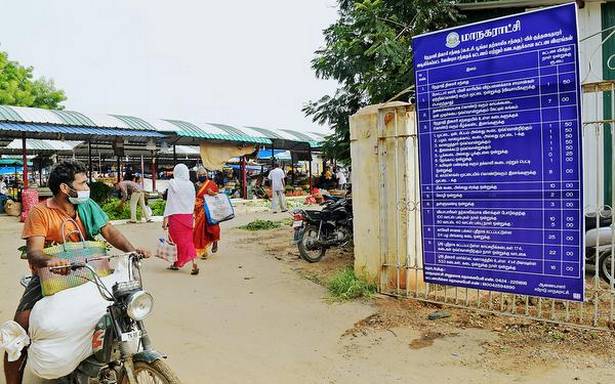 A day after traders staged a road blockade claiming that the contractor at the temporary Nethaji Daily Vegetable and Fruit Market was collecting excess charges, the Corporation installed five boards on the market premises carrying details of various charges that the contractor was allowed to collect from the traders.

The market with 900 shops temporarily functions at V.O.C. Park Ground and the corporation had allowed the contractor to collect only the charges fixed by it. However, claiming that excess charges were collected, traders staged road blockage for an hour at Swastik Corner on Monday. They said that instead of ₹ 1.50 for a gunny bag, the contractor was collecting ₹ 10, while for a tomato box, he was collecting ₹ 10, instead of ₹ 3. They also listed out various charges collected by the contractor.

On Monday evening, boards were placed at the entrances of the market and inside the premises. Also, traders were asked to take up any issues with the Corporation Office at 0424-2251616 or toll free number at 1800 4259 4890.