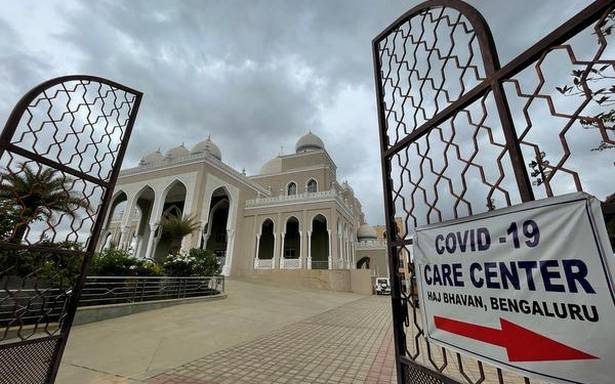 However, without a BU number, they cannot be allotted a bed even if there is one vacant

When 64-year-old Tumakuru resident Gangamma’s condition deteriorated after being diagnosed with COVID-19, her relatives were unable to find a government-quota bed for her in the district. The family cannot afford a private hospital.

In a desperate move, they brought her to Bengaluru hoping to get a bed in the civic body’s government quota. But even though beds were available, she couldn’t be assigned one. “Only city-based patients with a Bengaluru Urban (BU) number are allotted government beds in the city,” said her son Ramesh.

The family eventually got a Rapid Antigen Test for Gangamma using the address of a relative who lives in Bengaluru.

With COVID-19 cases rising in other districts, people from neighbouring Tumakuru, Kolar, Chikkaballapur, Ramanagaram and Bengaluru Rural districts, where healthcare infrastructure is not robust, are landing up in Bengaluru seeking beds.

Those who can afford it are seeking treatment in the city’s multi-specialty hospitals, but a majority are helpless. Several volunteer helplines are flooded with calls from patients in other districts seeking beds in Bengaluru.

As a result, there has been a growing demand for the authorities to allow patients from other districts to also be allotted government-quota beds.

“There are beds available under government quota in the city that are lying unoccupied, even as the poor from neighbouring districts are struggling to get government beds in their districts. Securing treatment in private hospitals is not even an option for them. It is high time the government starts allotting government quota beds in the city for out-of-district patients as well,” argued Dr. H.V. Vasu, co-ordinator, Karnataka COVID-19 Volunteers Team and BMC-92.

A month ago, Bengaluru accounted for almost 80% of the COVID-19 cases in Karnataka. With the trajectory of the pandemic changing, this has dropped to less than 30% in the last two weeks, indicating a rise in cases in other districts.

Down from a peak of 25,000+ cases, the city has been reporting 8,000-13,000 cases per day over the last one week. This, along with a massive ramp up of COVID-19 Care Centres with several oxygenated beds, has added several beds to the city’s healthcare infrastructure, but most are lying unoccupied.

On Sunday evening, 601 High Dependency Unit (HDU) beds, essentially oxygenated beds, were unoccupied in the city’s hospitals under the government quota, and over 700 oxygenated beds were available in CCCs – a critical resource for COVID-19 patients. Apart from this, 4,829 general beds in hospitals, and nearly 1,500 general beds in CCCs were also available. That said, not a single ICU and ICU ventilator bed was available in the government quota.

However, senior civic officials said allotting government quota beds for out-of-city patients is a call that has to be taken by the Health Department and the Chief Minister, who also holds charge of the Bengaluru Development portfolio.

“The cases seem to have plateaued in the city. We expect numbers to go down further over the next two weeks. Keeping a buffer for the city in the event that COVID-19 cases rise again in Bengaluru, beds can be allotted to out-of-city patients as well,” said a senior civic official.