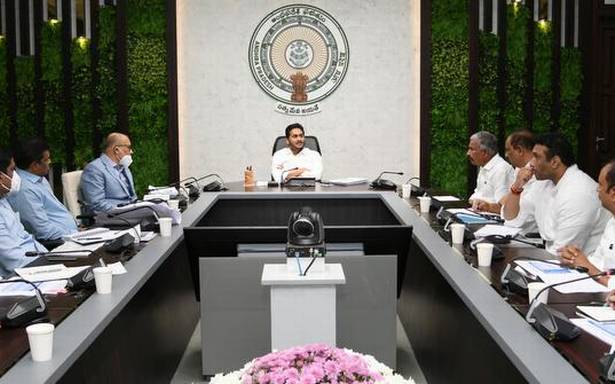 Chief Minister Y.S. Jagan Mohan Reddy has called upon the officials to explore the opportunities for developing a gateway port in Kakinada SEZ by taking advantage of its land bank and suggested that it be provided with the required road and railway connectivity.

He also suggested development of free-trade warehousing zones around the seaports in the State, and ordered that the construction of four fishing harbours in the first phase at Uppada, Machilipatnam, Nizampatnam and Juvvaladinne should be completed by June 2022.

Further, he wanted air connectivity from Kadapa and Kurnool to Visakhapatnam improved.

In a review meeting on the development of sea and airports and road infrastructure on Monday, Mr. Jagan Mohan Reddy said top priority should be given to increasing international connectivity from Visakhapatnam and Tirupati airports.

The officials informed him that the construction of the Ramayapatnam port would be completed in 24 months and 25 million tonnes of cargo would be transported in the first phase.

Officials told the Chief Minister that works related to Vijayawada-Bangalore National Highway (NH) via Kodikonda checkpost were going on at a brisk pace and focus was laid on the NH connecting Sheela Nagar with Sabbavaram in Visakhapatnam district.

While blaming the previous government for the bad condition of roads, Mr. Jagan Mohan Reddy ordered the officials to take up repairs as and when the rains subside, and claimed to have created a special fund for repairing the damaged roads.

He said there should not be inordinate delays in completing approach road works at various bridges in the State.

The officials informed him that plans were being drawn for laying new roads with a financial assistance of ₹6,400 crore from the New Development Bank.