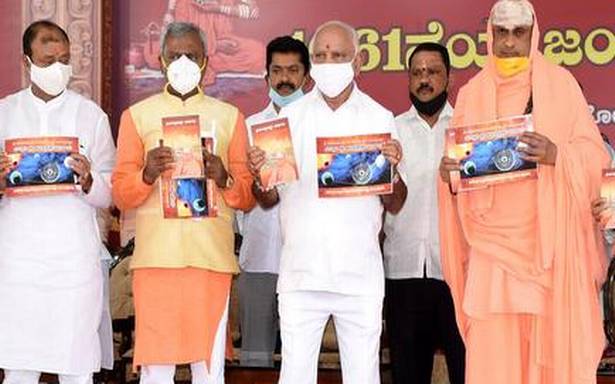 “The Mutt was founded on the banks of river Kapila centuries ago and the legacy left behind by the Mahaswamiji is being carried forward through spiritual, religious and educational activities,” the Chief Minister said, after inaugurating the celebrations.

Mr. Yediyurappa said the contributions of Suttur Mutt in religious, spiritual, academic, social, literary and cultural fields were immense. When the State was in the grip of COVID-19, it volunteered to reach out to help the needy. It gave all support to the government in handling the COVID-19 crisis and when the State was under the lockdown. Through Dasoha, the Mutt has helped humanity, he said.

Stating that the contributions of mutts in the State were aplenty, he said they have extended help socially and educationally through their activities. Suttur Mutt has been a model to many mutts because of its activities in many fields. The government will continue its support to the pro-people works being carried by the mutt.

Though the Jayanthi celebrations were being organised in a simple manner over COVID-19, the Mutt was reaching out to a large number of devotees with the help of technology, the Chief Minister added.

On the occasion, he released a book “Sri Suttureshwara Shatakagalu”. Many seers were present during the inauguration.

Later, the Chief Minister visited the Chamundi Hills and offered puja at Sri Chamundeshwari Temple. From there, he went to Kalamandira to inaugurate the Jan Sevak convention organised by the BJP.