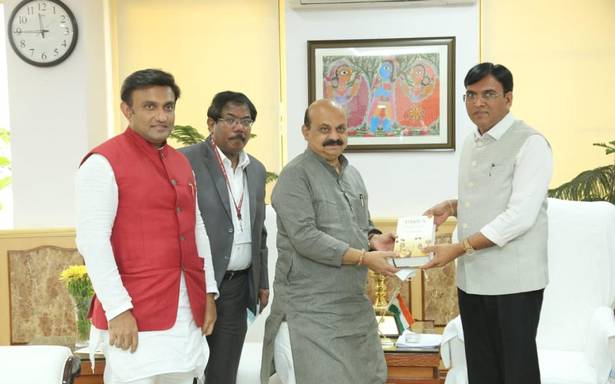 With farmers facing shortage of Di-ammonium Phosphate (DAP) and Muriate of Potash (MoP) for taking up sowing operations in the rabi season, Chief Minister Basavaraj Bommai called on Union Minister for Fertilisers, Health and Family Welfare Mansukh Mandaviya in Delhi with a request for additional supply of nutrients to Karnataka.

On COVID-19 vaccination drive, the Chief Minister told mediapersons in Delhi that Karnataka had administered 1.48 crore doses in September. The State has a stock of 51 lakh doses of vaccine.

So far, 37% of eligible persons have been administered the second dose while 81% of the eligible population has been given the first dose. The government has set a target of giving first dose to 90% of the targeted population and second dose to 70% of the population by December 31, the Chief Minister said.

The government has sought more funds from the Centre under the National Rural Health Mission. Mr. Mandaviya would visit Bengaluru on October 10 for the convocation of National Institute of Mental Health and Neurosciences. During his visit, he promised to review schemes in the health sector, Mr. Bommai said.

The Chief Minister also met Union Finance Minister Nirmala Sitharaman to thank her for appointing him as Chairman of the Group of Ministers on GST. He discussed rationalisation of GST with Ms. Sitharaman, official sources said.