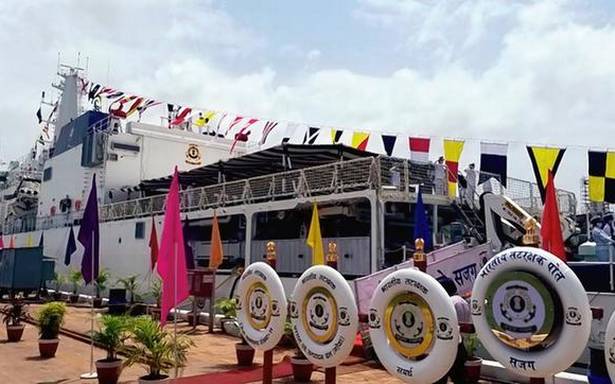 Observing that the Coast Guard plays an important role in supporting neighbouring countries in the Indian Ocean Region, National Security Advisor (NSA) Ajit Doval on Saturday said that the force will have greater responsibilities in the years to come as India’s maritime zones expand to include entitlements in the extended continental shelf.

Mr. Doval made the comments after virtually commissioning the Offshore Patrol Vessel (OPV) ‘Sajag’ into the Indian Coast Guard. This is third of five OPVs indigenously designed and built by the Goa Shipyard Limited.

Mr. Doval also said that this lean and visible service plays a critical role in anti-smuggling and anti-narcotics, both nationally and internationally, a Coast Guard statement said.

In his address, Mr. Doval said that the concept of forming the Coast Guard was conceived after the 1971 war, when it was assessed that maritime borders are equally vital as land borders, the statement said. “The blueprint for a multi-dimension Coast Guard was conceived by the visionary Rustamji Committee even as the United Nations Convention of the Laws of the Sea (UNCLOS) was being negotiated and India’s assets off Mumbai high were growing,” the statement quoted Mr. Doval as having said.

The Indian Coast Guard was created through an Act of Parliament in 1978 and has today emerged as the fourth largest in the world, with almost 160 ships and 62 aircraft.