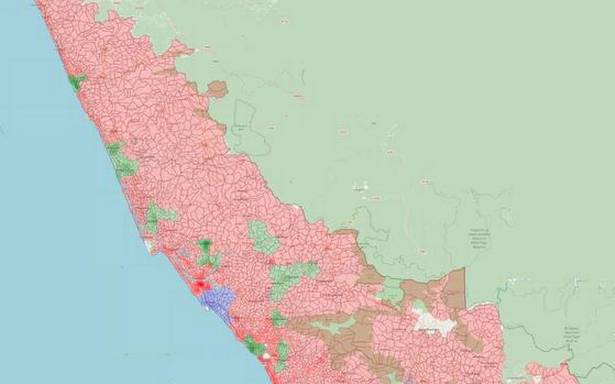 OSM-Kerala embarks on GIS mapping of 21,000 wards with help from openly available images and data

A few months ago when the Kochi Corporation brought out a crude map for the visualisation of the pandemic-related restrictions, volunteers of OpenStreetMap (OSM) Kerala, associated with the global collaborative project of creating a free and editable world map, reached out and helped the authorities to fine tune it.

Though the Corporation wanted to prolong the association beyond the immediate need, lack of access to inter-departmental geospatial data put paid to the idea.

That remains the single biggest hurdle as OSM-Kerala goes about the GIS (Geographic Information System) mapping of 21,000 local body wards across the State with the help of openly available images and data since last November.

This is being done through remote mapping that helps to map a relatively large area more rapidly though with obvious disadvantages in terms of data accuracy and detailing.

“For greater accuracy, we need to undertake field works with community-level participation, including that of the local bodies concerned. The advantage of such an initiative can be gauged from the mapping of two panchayats Koorachunde and Velloor panchayats in Kozhikode and Thrissur districts respectively where we were able to embed the maps with extensive geospatial data like road networks, buildings etc,” said Manoj Karingamadathil, one of the volunteers actively engaged in digital mapping.

So far, they have completed mapping of 4,400 wards spread across the local bodies of Kasaragod, Kannur, Wayanad, and Kozhikode districts. But with limited resources and volunteers, it may take another year-and-a-half before the rest of the wards are remotely mapped.

Interestingly, a German mapper, Heinz Vieth, is actively participating in the digital mapping out of his love for the State.

Before undertaking the ongoing initiative, OSM-Kerala had brought out the digital maps of nearly 1,100 local bodies in the State, which was released on November 1 last year.

“The digital maps we prepare are openly accessible and can be downloaded from the portal opendatakerala.org and are being widely used in the Wikipedia pages of local bodies and COVID-19 visualisation portals. The availability of more accurate geospatial data would be of great help during disaster management,” said Naveen Francis, another mapper.

He recollected how the rescue operations during the 2018 deluge were crippled by the absence of such data as Google Maps service, which was heavily relied on, was not freely available beyond a point.

Though OSM-Kerala was initially associated with the ongoing Mapathon Keralam, a participatory mapping campaign undertaken by Kerala Spatial Data Infrastructure (KSDI) under the Kerala State IT Mission (KSITM), the relation seems to have run cold since then.