The case was filed by Surat BJP MLA Purnesh Modi over Gandhi's alleged remark on the surname. 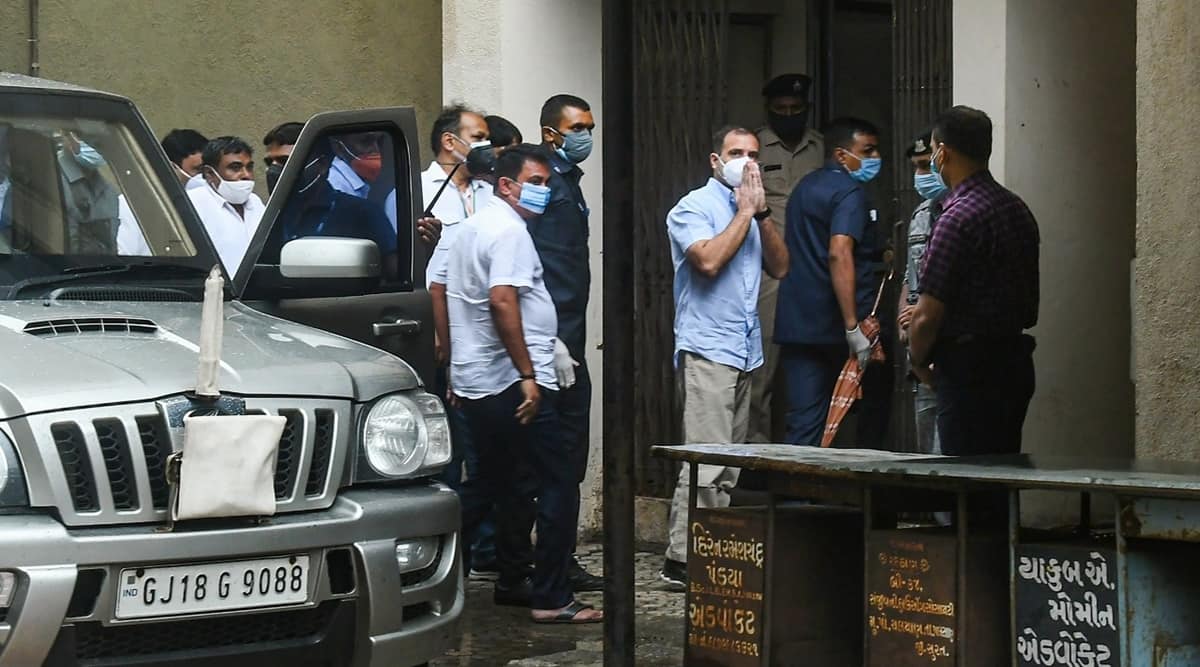 Congress leader Rahul Gandhi appeared before a magistrate’s court in Surat on Thursday to record his statement in a criminal defamation suit filed by a BJP MLA from Surat and denied making any defamatory remarks on people with the surname ‘Modi’.

The case was filed by Surat BJP MLA Purnesh Modi over Gandhi’s alleged remark on the surname.

In his statement before Chief Judicial Magistrate (CJM) A N Dave, Rahul denied making any defamatory remarks on people with the surname Modi during a rally at Kolar, Karnataka, before the 2019 Lok Sabha elections.

When the magistrate asked Rahul, the Lok Sabha MP from Wayanad in Kerala, whether he had said Prime Minister Narendra Modi gave Rs 30 crore to an industrialist, he told the court that being a national leader he keeps raising issues of corruption and unemployment in his addresses in the interest of the nation, and it is his right to do so.

The court asked whether he had said that all people with the surname Modi are thieves, to which Rahul replied that he never said such words.

Only lawyers from both sides were among a handful of people allowed in the courtroom to maintain Covid-19 protocol. The court posted the matter for further hearing on July 12.

Rahul faces a criminal defamation suit filed by Purnesh Modi, BJP MLA from Surat West constituency, who has alleged that he had defamed the Modi community by comparing the Prime Minister with economic offenders Nirav Modi and Lalit Modi. According to the complainant, at a public meeting in Karnataka, Rahul asked why “all thieves have the surname Modi”.

Purnesh Modi is also president of Surat Modhvanik Samast Panch, whose members include people of the Modi community.

Advocate Kirit Panwala, who represented Rahul, told The Indian Express, “When cross-examined on the allegations, Rahul Gandhi told the court that he had gone to Kolar to address public meetings during campaign for the Parliamentary elections. When the judge asked whether he had made the alleged statement, he responded that his speech was against Narendra Modi and not the entire Modi community, and that he loved all communities and respected them.”

The court rejected a revision application submitted by Purnesh’s lawyer B V Rathod to include two witnesses and two pieces of evidence — a CD and pen drive.

Panwala contended, “The complainant’s lawyer intentionally wanted to keep delaying the process…and submitted two applications that the court rejected. Now the case has reached the stage of final arguments, which will start from July 12.”

BJP MLA Purnesh Modi said, “We will fight on…we are hopeful of getting justice. Rahul Gandhi had defamed the Modi (Ghanchi) community of not only Gujarat; our community is spread across the country.”

Earlier, Rahul was given a grand welcome by Congress supporters on his arrival at Surat airport, and to his journey to the district court, with supporters at different locations on the route shouting slogans and showering rose petals.