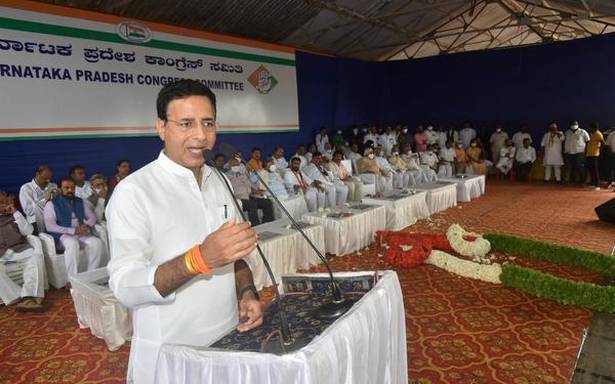 The Congress on Wednesday demanded a Supreme Court-monitored probe into the alleged bribery case involving e-commerce firm Amazon and the recent seizure of nearly 3,000 tonnes heroin in Gujarat.

Over the weekend, the Directorate of Revenue Intelligence (DRI) seized 2,988.21 kg heroin worth crores of rupees from two containers at the Adani-run Mundra port in Kutch district.

Mr. Surjewala claimed that the company, whose imports were seized, had earlier imported 25,000 kg of the same type of drugs worth ₹1.75 lakh crore. He said as per media reports, Ashish Traders, whose import-export licence was allegedly used for the consignment, received merely ₹10 lakh as commission.

“Who is the drugs cartel? Why is the drug cartel prospering right under the nose of Narendra Modi and [Home Minister] Amit Shah? Is this not pushing India’s youth into the menace of drugs? Where are those drugs now? Is it not a breach of national security as these came from and are connected to the Taliban and Afghanistan. Why has Adani Mundra port not been investigated?” he asked.

“Should this matter now not be investigated by a special commission of sitting judges of the Supreme Court and a special SIT be put at their disposal?”

The Congress leader alleged that the Narcotics Control Bureau, the DRI, the Enforcement Directorate, the CBI are either ‘sleeping’ or targeting the BJP’s political rivals.

On the alleged bribery allegations involving e-commerce giant Amazon, he asked how can the company spend ₹8,546 crore in “legal fee when the Law Ministry’s annual budget is only ₹1,100 crore”.

“The so-called alleged bribery of ₹8,546 crore was being given to whom in the Modi government? Who received the money? Was this money given to annihilate the trade and business of crores of small shopkeepers, MSMEs and traders so that e-commerce company like Amazon could take away their businesses and livelihood? Will the Prime Minister of India raise and demand from his U.S. counterpart that criminal action be initiated there for alleged bribery against Amazon?” he asked