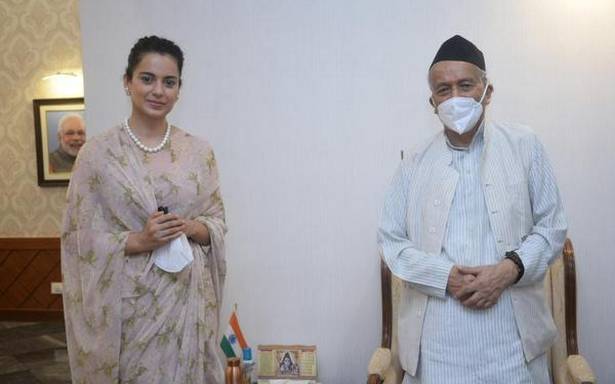 Maharashtra’s ruling Congress and the Nationalist Congress Party slammed actor Kangana Ranaut on Monday over her “BJP appeasing” tweet, saying her statements demeaning Maharashtra and the Mumbai Police were made on the instructions of the Bharatiya Janata Party.

“BJP has committed a sin and those sins can be washed off only by apologising to the people of Maharashtra,” said Maharashtra Congress general secretary Sachin Sawant.

The reaction comes after Ms. Ranaut took a dig at actor Urmila Matondkar, who recently joined the Shiv Sena, over her purchase of a property in Mumbai. “Dear @UrmilaMatondkar-ji, the houses I constructed through my hard work were demolished by the Congress. By appeasing the BJP, I was only handed 25-30 cases. Had I been as smart as you, I would have appeased the Congress. How stupid I am, right?” read Ms. Ranaut’s tweet in Hindi.

Mr. Sawant said Ms. Ranaut claimed she had knowledge about the drug mafia in connection with the death of Sushant Singh Rajput. “But she never gave any information to the Narcotics Bureau. BJP used public money for her Y security. She compared Mumbai to Pakistan-occupied-Kashmir, showed disrespect to Maharashtra CM and called Mumbai police a mafia. BJP gave her political protection.”

Ms. Ranaut’s statement admitting to “appeasing BJP” proves that she was acting on the orders of that party. Such low level of politics by any political party had never been seen in Maharashtra, he said.

NCP MLA Rohit Pawar said with Mr. Renaut’s acknowledgement that she was working on the orders of the BJP, the true face of the party was out in the open. “Proud citizens of Maharashtra will now decide the fate of the party,” he said.

Ms. Matondkar was in the news after she bought commercial office space in Mumbai at a cost of ₹3 crore. Ms Matondkar said the money for the purchase came from selling her flat.