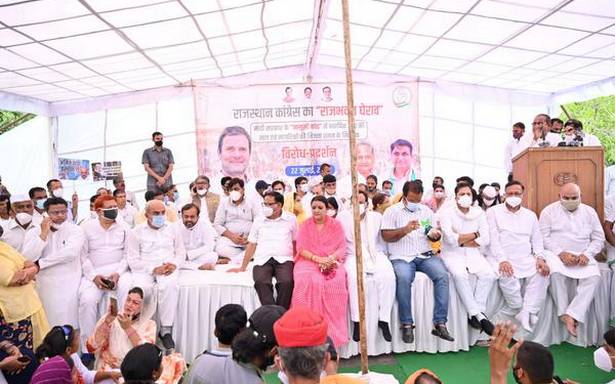 Mr. Dotasra said the snooping episode amounted to violation of the right to privacy enshrined in the Constitution and the use of Pegasus spyware, developed by an Israeli firm, had endangered the country’s security. The government had illegally hacked the phones of those occupying high constitutional offices as well as journalists and activists, he said.

“Prime Minister Narendra Modi and Mr. Shah have turned out to be the world’s biggest spies by their conduct,” Mr. Dotasra said, addressing the protesters. He said Mr. Modi had not fulfilled any of his promises made before coming to power.

Meanwhile, Chief Minister Ashok Gehlot said in a statement that the income tax raids on the offices of two media institutions in several States was a “brazen attempt” to suppress the voice of media. “The Modi government cannot tolerate even an iota of its criticism. Due to its fascist mentality, the BJP does not want to see the truth in a democratic set-up,” Mr. Gehlot said.

Mr. Gehlot said the Modi government, by indulging in such actions and gagging the media, wanted to convey the message that if the media did not become “Godi Media” (embedded media), then its voice would be suppressed.