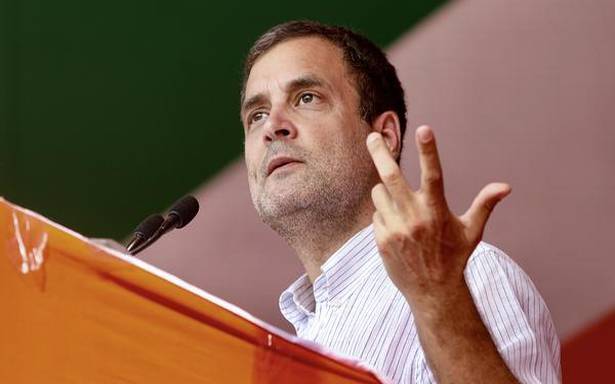 It will help “Mr. Modi’s friends” to increase their income, says Rahul

The Congress on Wednesday slammed the Narendra Modi government for hiking the fertilizer prices, and claimed that it will put an additional burden of ₹20,000 crore on farmers.

Former Congress chief Rahul Gandhi, in a tweet, claimed that the government’s move will help “Mr. Modi’s friends” to increase their income.

“What did Modi government increase? GST and petrol, diesel and fertilizer prices; income of ‘Modi’s friends’; atrocities on annadatas [food providers] even during the pandemic. What did it reduce? Agricultural subsidy, farmer’s income and dignity of the Central government,” Mr. Gandhi said on twitter and tagged a news report about the rise in diesel and fertilizer prices.

Chief spokesperson of the party Randeep Surjewala, addressing a virtual press conference, alleged that the BJP had “anti-farmer” mindset and is conspiring to ‘loot’ farmers by increasing prices of farm inputs.

He claimed that the Modi government wants to punish farmers for continuing their agitation over the three farm laws and wants to “handover farming to corporate friends”.

“Prime Minister Narendra Modi and the BJP government are bent upon destroying farming and is proving to be an enemy of farmers. It seems that PM Modi is conspiring to enslave 62 crore farmers and labourers.”

The Congress leader claimed that for the first time in 70 years, the price of a 50-kg pack of DAP [diammonium phosphate] fertilizer has been raised from ₹1,200 to ₹1,900.

“The Modi government, which is ‘anti-farmer’, has now increased prices of DAP and other fertilizers that will put an additional burden of ₹20,000 crore on farmers across the country,” Mr. Surjewala alleged.

“The aim of the Modi government is to make farming difficult and unremunerative so that farmers surrender and hand over their land to industrialists.” He said the three farm laws were enacted with this intention.

The Congress leader said his party will support the farmers at every step and claimed that the farming community will teach the BJP a lesson in the next elections.