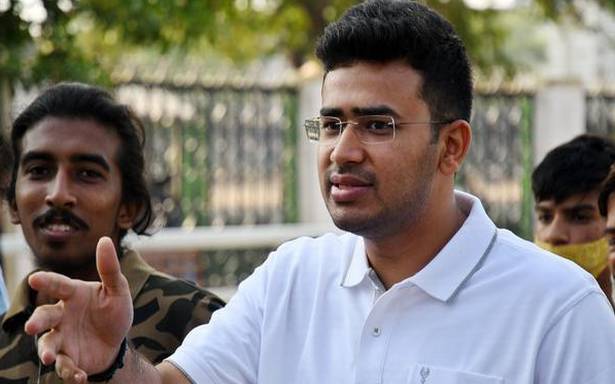 The Congress on Saturday asked for a police case to be registered against Lok Sabha member and BJP leader, Tejasvi Surya, and his uncle, BJP MLA Ravi Subramanya, and their disqualification as lawmakers for allegedly demanding cash for vaccines that were being administered at a private hospital in Karnataka.

“Scandalous & Shocking! This is BJP’s Profiteer from Adversity. People are dying of shortage of #vaccine & BJP leaders are making money of their misery. Can their be a bigger crime, Mr. Modi?” Congress general secretary Randeep Surjewala posted on Twitter.

Mr Surjewala, who is the All India Congress Committee (AICC) in-charge for Karnataka, was reacting to news reports of Mr. Subramanya, a three-term MLA, asking for money during the vaccination drive.

Addressing a virtual press conference, Congress press spokesperson Pawan Khera referred to an audio clip that was circulated in the local media where the BJP MLA’s name cropped up.

“Today, some audio recordings were leaked in the local media of Karnataka… In those audio recordings, supervisor of a private hospital clearly tells member of the public that per vaccination he will have to pay ₹900 and not a penny less. The supervisor also tells this gentleman on telephone that ₹700 of this ₹900 have to be given to Mr. Ravi Subramanya, BJP MLA from Basavanagudi, Karnataka, and uncle of Tejasvi Surya,” alleged Mr. Khera.

The Congress spokesperson said Mr. Surya, who is also the national president of the Bharatiya Janata Yuva Morcha, had put up banners with his photograph, advertising the vaccine drive in the same hospital and at the same rate of ₹900 per dose.