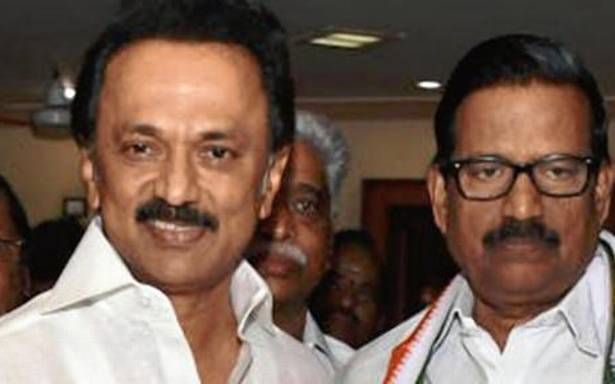 According to a section of senior leaders, the party is miffed at the DMK’s hardline offering of only 18 seats

The Congress may not be averse to exiting the DMK-led Secular Progressive Alliance (SPA) in Tamil Nadu, if the Dravidian party does not allot it a “respectable” number of seats for the Assembly elections.

According to a section of senior leaders, the party is miffed at the DMK’s hardline offering of only 18 seats. Some leaders claim the DMK has not reached out to the Congress after the earlier talks failed.

The Congress, multiple leaders confirmed to The Hindu, desired 40 seats but is willing to settle for a ‘respectable’ number of seats, which is being pegged at 30-31 seats. Failing such an offer, the Congress plans on exiting the front as it deems it an “insult”.

“When the AIADMK is making all efforts to keep its allies intact, the DMK’s behaviour is not appropriate. From the way they have held the talks, ‘insulted’ the allies, it seems that they do not want us in the alliance. If two of the most powerful TN Ministers, Thangamani and Velumani, can go and meet DMDK chief Vijayakant to mollify the party on seat adjustments, why can’t the DMK reach out to its allies,” a senior TNCC leader asked angrily.

According to him, the Congress’ “vote share” is important to ensure the DMK wins and that the national party is working to make DMK president M.K. Stalin the next Chief Minister. “It seems they don’t want us. We will wait for a couple of days. If not, we will take our decision,” he said.

Asked if the party will contest alone, he said they are contemplating that option as well as taking along the allies who are upset with the DMK’s seat allocation.

Another senior leader said the party’s former president Rahul Gandhi, has told the State leadership to ensure that the Congress gets “dignity” in the alliance. “Our leader Rahul Gandhi’s visit too, has had very good resonance on the ground,” the leader said.

If the Congress leaves the DMK front, the party is toying with the idea of fielding candidates against the BJP wherever they are contesting. “The DMK should realise that its anti-BJP campaign will work only if the Congress is there in the alliance. Ultimately, it is the Congress that is taking the anti-BJP message to the people,” he contended.

All the leaders said going with Kamal Haasan’s Makkal Needhi Maiam might be an option, but it would have to be discussed.

The Congress has scheduled a meeting of its leaders on Thursday evening, where these issues will be discussed and more clarity is expected to emerge.