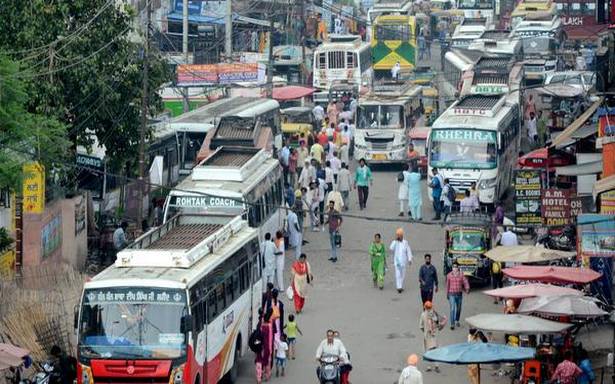 The protesting employees are demanding regularisation of their jobs.

Around 8,000 contractual employees of the state-owned Punjab Roadways and Pepsu Road Transport Corporation (PRTC) on Monday went on an indefinite strike, demanding regularisation of their jobs.

Private buses, however, continued to ply in the state.

He said only 200 to 300 buses operated by regular employees would ply on the streets.

The indefinite strike call caused inconvenience to many passengers who usually travel on state-owned buses.

Protesting employees held demonstrations at many places and raised slogans against the state government for not acceding to their long-pending demands.

They also threatened to lay siege to the residence of Punjab Chief Minister Amarinder Singh at Siswan in Mohali on Tuesday if their demands were not accepted.

Mr. Gill said that in July and August, they were assured that their demand of regularisation would be met.

Despite two cabinet meetings having been held since then, the issues continue to remain unresolved, he added.

The “apathetic” attitude of the State government towards their demands forced them to go on strike, Mr. Gill said.

Besides regularisation of jobs, the protesters are also demanding an increase in the fleet size from around 2,500 buses at present to at least 10,000.