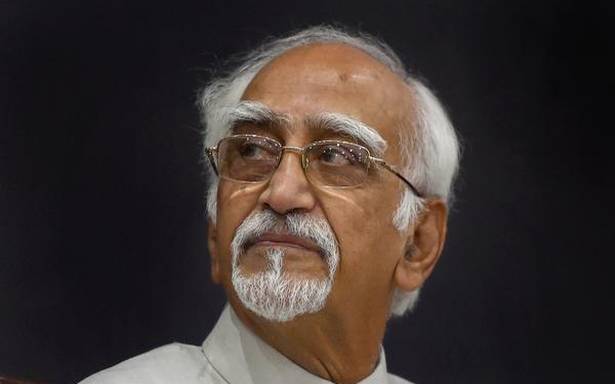 Former Vice-President Hamid Ansari has said a subversion of core values is under way and the word secularism has “almost disappeared” from the government’s official vocabulary.

Mr. Ansari wrote in his autobiography, By Many A Happy Accident, that this subversion was “compounded by the abdication or failure of other social and political forces to comprehend its true nature and the urgency to counter it”.

According to him, constitutional values such as a composite culture, fraternity and scientific temper had also seemingly disappeared from the political discourse and replaced by “promotion of beliefs and practices of the contrary”.

Mr. Ansari, who had a distinguished career in the foreign service before becoming Vice-President, argued that the commitment to the rule of law appeared to be under serious threat. This, he said, arose out of a noticeable decline in the efficacy of State institutions, lapses into arbitrary decision-making and even mob rule.

The former Vice-President said the success of populism, depicted not as an ideology but a strategy to obtain and retain power and thriving on conspiracy, criminalisation of all Opposition and playing up external threats, “proved itself” in the 2019 general election.

“It was assisted by authoritarianism, nationalism and majoritarianism. This ideological potion, premised simplistically on the desirability of oneness of language, ethnicity, religion, territory and culture was administered successfully to a little over a third of the electorate,” he wrote.

Mr. Ansari, who served two terms as Vice-President, said the steps taken with regard to Jammu & Kashmir did little credit to the rule of law and the professed principles of Indian democracy.

“Similarly, the approach of the superior judiciary in opting for considerations of statecraft of the day, influencing the administration of justice does little credit to an iconic institution and damages public confidence,” he wrote.

According to him, the “consensus of yore” no longer existed in the country. “The option may lie in choosing between making it [society] inclusive or exclusive, between social peace and social strife, between a secular society accommodative of all faiths and a theocratic one premised on the primacy of one faith.”

Mr. Ansari revealed that one day Prime Minister Narendra Modi made an unscheduled visit to his Rajya Sabha office. “After I got over my surprise, I made the customary gestures of hospitality. He said that ‘there are expectations of higher responsibilities for you but you are not helping me’.”

“I said that my work in the Rajya Sabha, and outside, is public knowledge. ‘Why are bills not being passed in the din?’ he asked. I replied that the Leader of the House and his colleagues, when in Opposition, had appreciated the ruling that no bills will be passed in the din and that normal procedures of obtaining consent will be observed.”

“He [Mr. Modi] then said that Rajya Sabha TV was not favourable to the government. My response was that while I had a role in the establishment of the channel, I had no control over the editorial content…”