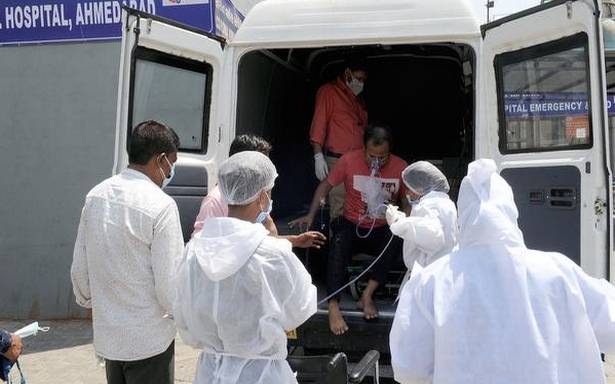 Bench asks why, if beds were vacant, COVID-19 patients were unable to get admitted to hospitals

The Gujarat High Court on Tuesday told the State government that despite the latter’s claims on the availability of beds in the State, patients ailing from COVID-19 continued to face a shortage leading to a scramble for beds in cities like Ahmedabad.

The Bench of Chief Justice Vikram Nath and Justice Bhargav Karia, during a hearing of the suo motu petition on the COVID-19 pandemic crisis in the State, sought to know why, if beds were vacant, infected persons were unable to get admitted to hospitals.

In its submission on Tuesday, the State government informed the court that of the 79,944 beds at COVID-19 hospitals and other care facilities in the State, 55,783 beds were occupied while the rest were vacant.

The State government’s lawyer Manisha Shah made the submission during an online hearing on the suo motu proceedings initiated by the court after the second wave of the pandemic began overwhelming Gujarat’s health infrastructure.

“Complaints are coming, maybe you are also receiving [complaints] that patients are not being admitted because there is no vacancy in hospitals. Beds are not available. The figures shared by you suggest that even designated hospitals have vacant beds,” the Bench told the State. “If that is true then why are people running around, finding sources and recommendations for getting hospitals beds and treatment?”

The court also raised concerns over claims that ‘108’ ambulances were taking considerable time to pick up patients in a critical condition, as the waiting period for them ran to several hours now.

The court also sought to know why critical patients were not taken in by government hospitals if they arrived in private vehicles instead of ‘108’ ambulances.

In the government’s defence, Ms. Shah said that although beds were available at other facilities, some were at a distance from patients’ homes, and people wanted to get admitted to specific hospitals, which resulted in full occupancy in those hospitals.

Ms. Shah also assured the court that the government has ensured adequate supply of medical oxygen and there was no scarcity of the life-saving gas at present.

A special control room has been set up at the Chief Minister’s Office to monitor oxygen supply to hospitals, she informed the court during the hearing.

On a query raised by the Bench about RT-PCR testing, Ms. Shah informed that all districts had the facility to conduct the tests and the government conducted an average of 1.65 lakh tests, including around 75,000 RT-PCR tests, which are considered more accurate than the rapid antigen test.

Senior advocate Percy Kavina, who was allowed to share the views of other High Court lawyers, expressed displeasure over the Centre’s decision to discontinue a scheme providing insurance cover to “corona warriors” under the Pradhan Mantri Garib Kalyan Yojana (PMGKP).

“Only 287 insurance claims were processed under the PMGKP, which is now being shut. Just 287 claims across the country? Though the new scheme is coming, why not continue the PMGKP?” Ms. Kavina asked.

After hearing all submissions, the court asked the government to file an affidavit and scheduled the next hearing on April 27.