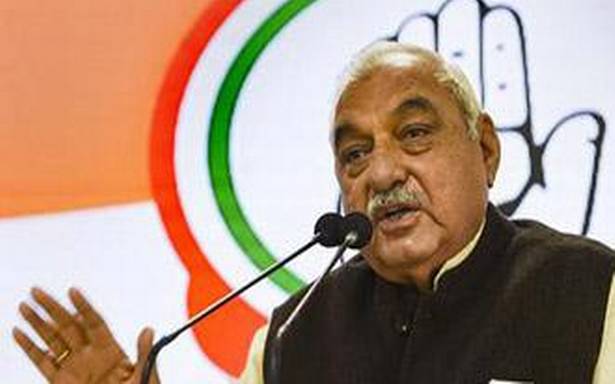 It should focus on strengthening healthcare system on priority for possible third wave, says ex-Chief Minister

Leader of the Opposition in the Haryana Assembly Bhupinder Singh Hooda said on Monday cases of COVID-19 have started to gradually drop but the State government should not lower its guard and focus on strengthening the healthcare system on priority for possible third wave.

Mr. Hooda said planning will have to be done immediately to handle the post-corona conditions as inflation, recession, poverty and unemployment, which are on the rise. “The unemployment rate in Haryana has reached 35.1% and every third person of the State is unemployed. Therefore, the government should help people whose business has been ruined financially during the pandemic,” he said during a virtual press conference.

“The government should give ₹5 lakh to the families of the people who lost their lives due to corona. Pension should be announced for those families with no bread-earner left in their family. For this, the government must first collect the correct figures of those who died because it is clear to everyone that the number of people who died from the pandemic is much higher than the numbers put out by the government. The government should also announce special insurance for all the frontline warriors, including doctors, medical staff, sanitation workers, ASHA workers, Anganwadi workers, policemen and journalists who are needed to step out of their homes to save the lives of the people,” he said.

On being asked about Haryana Chief Minister Manohar Lal’s remark, on regulated pace of vaccination, Mr. Lal said he did not agree with the statement. “Instead of slowing the pace of vaccination, the pace needs to be increased. Statistics put out by the government show that only 20,000 doses are being administered daily. If vaccination was done at the same pace, it would take many years for all people to get vaccinated,” he said.

“In this hour of crisis, we are ready to cooperate with the government for the welfare of the people. We have worked to raise awareness about the pandemic and awaken the government whenever they are found wanting as our focus has been on helping people at all levels. But the Chief Minister refused to even call an all-party meeting and started resorting to making personal comments,” he said.

Mr. Hooda said the government had failed in containing the pandemic. “In such a situation, it was necessary that the Opposition make the government aware of the truth. The government should also not shy away from confessing the truth because they will be able to intervene effectively only if they accept the truth.