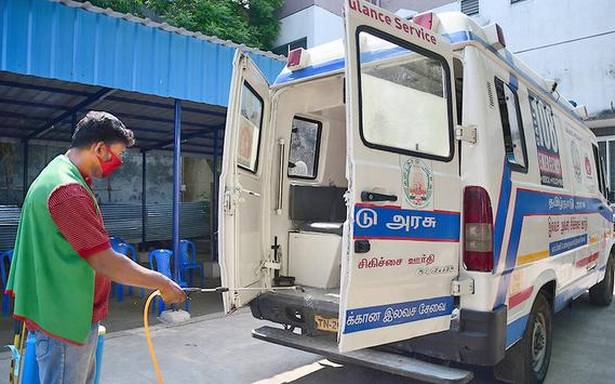 Hospital beds are hard to come by

Sandhya Kumar got a call from a friend in Dubai two days ago to help his sister get a hospital bed as she was becoming breathless. Ms. Sandhya and her husband were then returning from Chengalpattu.

They started making calls as they were driving back to the City. “We were trying desperately, contacting friends, doctors in the family to find her a bed. Her oxygen saturation level had fallen to 72. Her husband hired an ambulance and took her to two hospitals, but they could not admit her as they were overflowing with patients. They were getting nowhere and they came back home.”

All the networking over the phone helped and Ms. Sandhya finally managed to find a hospital with bed after two hours. The next issue was getting an ambulance. An ambulance service in Purasaiwalkam agreed to transport her for ₹3,500.

The ambulance took her to Government Omandurar Multi Super Speciality Hospital. “But she collapsed even as they were preparing for admission, as her oxygen level fell to 40. She was revived on the corridor. Now we have been told she is out of danger,” says Ms. Sandhya.

An all-day search for hospital bed

Iyyavu called many hospitals to admit his father, a stroke patient, the whole of Tuesday. But all of them said they had no beds. Finally a private medical college in Poonamallee said they had two beds.

“I called 108 ambulance and he drove us from our house in T. Nagar to the hospital. But when I arrived there, they told me there were no beds with oxygen support. But there were many beds as I went in and checked. I realised they were hesitating as my father was aged. He is 64 years old and his oxygen saturation level was 91.”

Mr. Iyyavu asked the Government Omandurar Multi Speciality Hospital, but there were no beds there either. He said private ambulance service providers demanded ₹6,000 to transport him. Finally an 108 ambulance came to his aid. “As we tried hospital after hospital, my father’s oxygen saturation level fell to 65. The ambulance driver was helpful. He brought us to Rajiv Gandhi Government General Hospital, where he waited until the admission process was completed. We had been on road for 8 to 9 hours.”