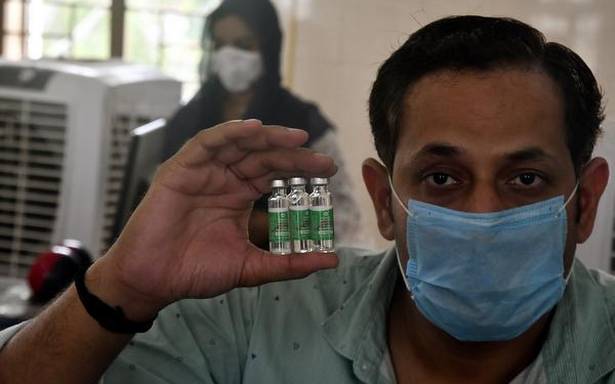 Pharmaceutical major Merck and Ridgeback Biotherapeutics announced via a press release on October 1 the early results from Phase-3 trials that its anti-viral drug molnupiravir halved the chances of hospitalisation in COVID-19 patients with mild or moderate disease.

Read | The story of how a mystifying novel coronavirus variant, Delta, has India and the globe in its grip

Considering that children below 11 years rarely suffer from severe disease and death, is it necessary to vaccinate young children? Read here.

U.K. to open up more travel by scrapping hotel quarantine for dozens of countries -Telegraph

British Prime Minister Boris Johnson will open up more countries for hotel quarantine-free travel later this week, The Sunday Telegraph reported, saying that the UK’s "red list" of destinations would be slashed to nine from 54.

Fully vaccinated arrivals from countries including South Africa, Brazil, Mexico and Indonesia will no longer have to quarantine in a government-designated hotel for 10 days when they get to England from later in October, the newspaper said. -Reuters

More than 5,000 people protested October 2 in Romania’s capital of Bucharest to reject upcoming measures used by authorities to combat an alarming surge of COVID-19 infections.

Daily COVID-19 infections in the European Union nation of 19 million have skyrocketed from around 1,000 daily cases a month ago to 12,590 new cases on October 2. That was Romania’s highest daily number of infections since the pandemic started. -AP

Cuban scientists have developed three vaccines against COVID-19, all of which are waiting to receive official recognition from the World Health Organization. -Reuters

Russia sees no hurdles for WHO approval of Sputnik V vaccine

All the barriers to register Russia’s Sputnik V COVID-19 vaccine with the World Health Organization (WHO) have been cleared and only some paperwork remains to be completed, Russian Health Minister Mikhail Murashko said on October 2.

The Sputnik V shot, widely used in Russia and approved for use in over 70 countries, is undergoing a review by the WHO and the European Medicines Agency (EMA). Their approval could open up new markets for the shot, especially in Europe. -Reuters