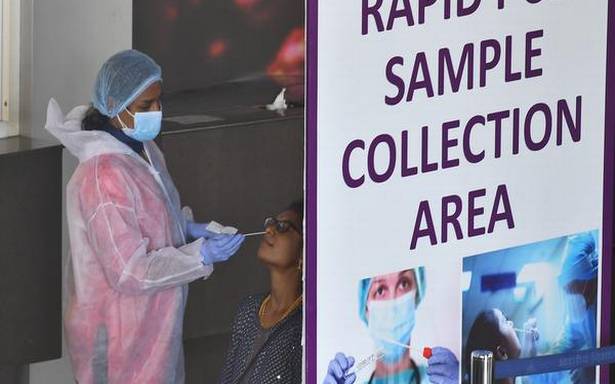 Here are the updates:

The Union Health Ministry has written to States to impose restrictions such as night curfews and declare containment zones if districts either have a 10% positivity rate or occupancy in oxygen-supported or Intensive Care Units rises to 40%.

So far about 200 cases of COVID’s fast-spreading strain Omicron have been confirmed in India, 77 of whom had recovered or migrated, according to the Ministry on Tuesday.

British Prime Minister Boris Johnson said on Tuesday that he would not be introducing new COVID-19 restrictions in England before Christmas, but the situation remained extremely difficult and the government might need to act afterwards.

"We don’t think today that there is enough evidence to justify any tougher measures before Christmas," he said in a video posted on social media.

"We can’t rule out any further measures after Christmas," headded. "We continue to monitor Omicron very closely and if the situation deteriorates we will be ready to take action if needed." – Reuters

Jammu and Kashmir and Odisha on Tuesday recorded their first cases of the Omicron variant of COVID as the count of the new strain in 14 states and union territories crossed 200 even as the Centre said there is a need to "activate" war rooms, take "pro-active" action and consider night curfews.

According to the latest data from the Centre and the states on Tuesday night, India recorded 220 cases of the Omicron variant, 19 days after the first two cases in the country were detected in Karnataka on December 2.

While health authorities in J and K said three persons in the union territory tested positive for the Omicron variant in Jammu, the tally in Maharashtra and Telengana rose to 65 and 24 respectively with the addition of 11 and four cases of the potentially contagious strain. – PTI

A man, who had returned to Kolkata from Ireland last week, tested positive for Covid-19 following which he was hospitalised on Tuesday, a health department official said.

The department is waiting for the genome sequencing report of the 27-year-old man to check if he was afflicted with the Omicron variant of coronavirus, he added.

"The man who has been working in Dublin, Ireland, for the last five years, arrived in the city flying from Manchester via Abu Dhabi and New Delhi. He was admitted to a hospital on Tuesday morning," the official said. – PTI

The Zambian subsidiary of resources giant Vedanta Resources Ltd has further committed to assisting the fight against the increasing number of Covid-19 infections in the southern African nation.

On Monday, Vedanta distributed 4,000 masks to commuters, adding to the 10,000 masks already distributed to the communities living around its operations in Zambia.

“Vedanta remains committed to helping Zambians in their battle against the Covid-19 pandemic. With the new variant posing a significant threat to public health, Vedanta reaffirms its commitment to help support the communities in as best way they can,” Vedanta said in a statement. – PTI

Israel announced on Tuesday that it will offer a fourth dose of the COVID-19 vaccine to people older than 60, amid concern over the spread of the Omicron variant of the coronavirus.

A Health Ministry expert panel recommended the fourth shot, a decision that was swiftly welcomed by Prime Minister Naftali Bennett as "great news that will help us overcome the Omicron wave that is spreading around the world."

Although the decision is pending formal approval by senior health officials, Bennett urged Israelis to get the dose as soon as possible, saying: "My message is – don’t waste time, go get vaccinated." – Reuters

Novavax said on Tuesday the World Health Organization’s (WHO) panel of experts had recommended a third dose of its vaccine, NVX-CoV2373, for immunocompromised persons.

The WHO’s Strategic Advisory Group of Experts on Immunization, known as SAGE, issued a series of recommendations, including the use of the vaccine in persons with comorbidities, breastfeeding women, and those living with HIV.

After reviewing Novavax data the independent experts said the vaccine could be used in pregnant women if the benefits of vaccination to the pregnant woman outweigh the potential risks. – Reuters

The British government said that from Wednesday it was reducing the COVID-19 self-isolation period to seven days from 10 days for people in England who get a negative result on a lateral flow test two days in a row.

With the Omicron variant spreading rapidly in Britain and record levels of cases over the past week many industries are struggling with staff shortages, including hospitals who have warned of the risk of an impact on patient safety.

Chinese city orders residents to stay at home, cuts public transport, due to one COVID-19 case

One local COVID-19 case has forced a Chinese border city next to Vietnam to ordered its residents to stay at home, halted public transport and some school classes and postponed the clearing of travellers and cargo to pass through its port of entry.

China has increased COVID-19 vigilance along its borders and at ports to prevent the virus from being brought in from sources overseas, after several small border towns, which have fewer health resources than major cities, suffered outbreaks over the past three months.

Dongxing city in the autonomous Chinese region of Guangxi, which has a population of more than 200,000, demanded all its residents remain at home from Wednesday and avoid going out unnecessarily, state broadcaster CCTV reported. – Reuters

The Biden administration will open federal COVID-19 testing sites in New York City this week and buy 500 million at-home rapid tests that Americans can order online for free starting in January as it tries to tackle the Omicron variant of the coronavirus sweeping the country.

Striking a more dire tone about the risks to the one-in-four American adults who are not fully vaccinated, President Joe Biden will lay out the initiatives in a speech on Tuesday warning of the risks from the fast-spreading variant, a senior administration official said.

The measures include activating some 1,000 military medical personnel to support hospitals already being overwhelmed by COVID patients in some areas. – Reuters