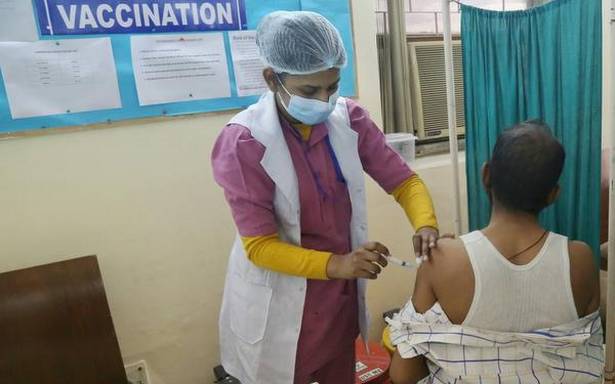 Only about one in 10, or about 23,628 healthcare workers inoculated themselves with the second dose of COVID-19 vaccine on February 13, according to data from the Health Ministry.

February 13 was an important day in India’s COVID-19 vaccination calendar marking 28 days — or four weeks — since the vaccination programme was flagged off by Prime Minister Narendra Modi on January 16.

On day one, 2,07,229 people were inoculated, according to figures from the Health Ministry so far. Ideally all of them should have been inoculated with the second shot on February 13.

The second doses of Covaxin and Covishield, the two vaccines approved, are recommended to be administered four to six weeks apart, according to guidelines from the Drug Controller General of India. While some international studies show that the vaccines can be more effective, when given apart even in a 6-12 week window, India’s current policy does not recommend such a wide spacing.

Unlike many countries where available vaccines are fewer than those required, India is still to exhaust its first stock of vaccines — about 16 million doses — that the government had ordered from vaccine companies in the first week of January.

Until Februay 14, about 8.24 million healthcare and frontline workers have been inoculated with at least one dose of the vaccine. Of them, around 2.72 lakh were vaccinated on February 13. No updated figures were available on February 14, which going by past trends, is unlikely to have seen a spike in vaccinations.

The 8.2 million vaccinations have been conducted over 1.72 lakh vaccination sessions, suggesting that only around half the total vaccination capacity was being utilised. For nearly a week, there have been around 4,00,000 inoculations a day.

India’s active caseload of coronavirus patients has dropped to 1.37 lakh as of February 14 or about 1.26% of India’s total positive cases. About eight in 10 of the new cases are from six States. Kerala reported the highest daily new cases at 5,471 followed by Maharashtra with 3,611 and Tamil Nadu at 477.