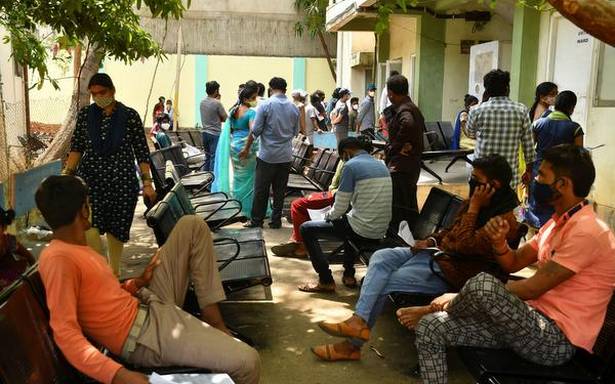 India’s COVID-19 infection tally climbed to 2,73,69,093 as 2,11,298 more people tested positive for the disease in a day, while the country’s recovery was recorded at 90%, according to the Union Health Ministry on Thursday.

The treatment candidate, ZRC-3308, was earlier shown to reduce lung damage during animal trials, the drugmaker said, adding it was found to be safe and well-tolerated.

The therapy is a cocktail of two monoclonal antibodies, which mimic natural antibodies that the body generates to fight infection.

"At this juncture, there is a critical need to explore safer and more efficacious treatments to combat COVID," Zydus Cadila’s managing director, Sharvil Patel, said in a stock exchange filing.

Our vaccine highly effective on COVID-19 variant prevalent in India, suitable for 12 yrs and above: Pfizer to Govt

Seeking a fast-track approval for its COVID-19 vaccine, U.S. major Pfizer has told Indian authorities that its jab has shown "high effectiveness" against the SARS-CoV-2 variant prevalent in India and on people of Indian ethnicity or nationality, while it is suitable for everyone aged 12 years or above and can be stored for a month at 2-8 degrees, sources said on Wednesday.

Pfizer, which is ready to offer 5 crore doses to India between July and October this year and has sought certain relaxations including indemnification, has held a series of interactions with the Indian government authorities recently including one this week, during which it shared the most recent data points regarding efficacy trials and approvals for its vaccine in various countries and by the World Health Organisation (WHO).

"The current situation in India, and across the world, is not ‘business as usual’ and we must not respond to it with processes as usual too," a source quoted Pfizer as having communicated to the Indian government.

Another source privy to the discussions said that following recent meetings between the Indian government and Pfizer’s Chairman and CEO Albert Bourla, they have agreed to jointly work on three key issues to accelerate approval for the company’s COVID-19 vaccine in India, namely procurement through a central government pathway; indemnity and liability; and the regulatory requirement for post-approval bridging studies.

In its latest communication to the government, Pfizer has also thanked the Government of India to have agreed to its request for procurement through a central government pathway and to discuss "the Indemnity and Liability protection".  – PTI

A tribal welfare department officer in a Chhattisgarh district has issued an order asking its staff members to get vaccinated against COVID-19, failing which their salaries for the next month will be withheld.

A copy of the order, issued by the assistant commissioner K.S. Masram in Gaurela-Pendra-Marwahi district on May 21, went viral on social media where some people expressed displeasure over the ‘diktat’.

The order asked officers and employees working in the tribal welfare department-run offices, ashrams (residential schools) and hostels in the district to get inoculated and submit their vaccination cards at its office.

If they do not take the vaccine, their salaries for the next month will be withheld, said the order which came into force with effect from the date of being issued. – PTI

India’s COVID-19 infection tally climbed to 2,73,69,093 as 2,11,298 more people tested positive for the disease in a day, while the country’s recovery was recorded at 90%, according to the Union Health Ministry on Thursday.

The daily positivity was recorded at 9.79%. It has been less than 10% for three consecutive days now, the ministry said. The weekly positivity rate has also declined and now stands at 10.93%.

Newborn baby tests positive in Varanasi but mother is negative

The family of a newborn girl in Varanasi is bewildered after the baby tested positive for COVID-19 soon after birth though her mother had tested negative before the delivery.

The 26-year-old woman is admitted in the S.S. Hospital in the Banaras Hindu University (BHU) in Varanasi.

Anil Prajapati, 32, a businessman, said his pregnant wife Supriya was admitted to the hospital on May 24. She was tested the same day through the RT-PCR which showed a negative COVID-19 result, as per her report.

Chennai continued to record a steady decline in fresh infections, with the daily count dropping below 4,000 on Wednesday. There was a marginal dip in new cases in the State as well, as 33,764 more people tested positive, even as 475 more succumbed to COVID-19.

Deaths due to COVID-19 continued to rise in a number of districts. Of the 475 fatalities (197 in private hospitals and 278 in government facilities), Chennai reported 98.