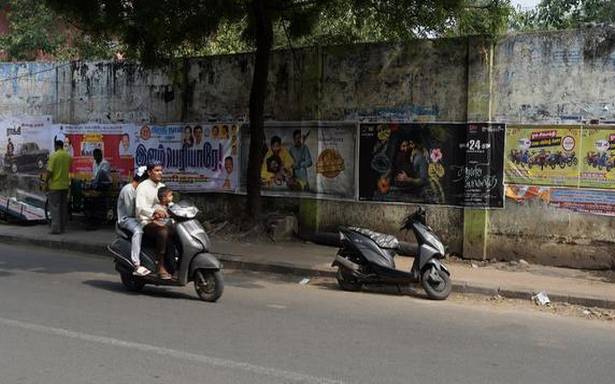 Those of political parties and films constitute the most common category

Despite sustained efforts by the Greater Chennai Corporation to remove posters from all public walls, the posters have now started resurfacing in several parts of the city.

In July, the Corporation began a campaign to keep the walls free from posters. Until the first week of September, the civic body had removed 1,37,267 posters from 45,900 locations across the city.

While a large number of walls still remained clean, posters have reappeared at several places. A visit to some areas in central and southern parts of the city showed that the problem was particularly prevalent in sections of Anna Salai, Royapettah, Vadapalani, Kodambakkam, Taramani, and Velachery.

A large number of posters were noticed in many parts of Anna Salai. The compound wall in one of the entrances to the Thousand Lights Metro Rail station was a case in point, where posters were pasted all over.

A senior official said that were difficulties in implementing the Tamil Nadu Open Places (Prevention of Disfigurement) Act. “It is a bit tedious. Most of these posters do not have the right contact of the printers or the one who is putting them up. We need to catch them red-handed to take action. The fines are not that heavy,” the official said.

Vishu Mahajan, Deputy Commissioner, Revenue and Finance of the Corporation, said that removal of posters took a backseat during the floods, because of which more posters appeared. “Commissioner has already asked us to begin the activity again. We are doing some as part of the ongoing mass cleaning drive under way at the moment. There will be more focus on clearing the posters over the next couple of weeks,” he said.