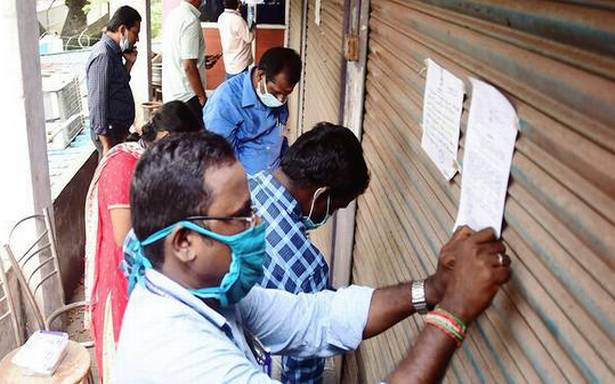 The occupants of the shops had not paid rent for several months, say officials

The Greater Chennai Corporation officials on Wednesday sealed nine shops in Korattur, which were functioning out of buildings owned by the civic body, as they failed to pay rent for several months.

Officials said of the 40 shops in a group of Corporation-owned buildings in Korattur, occupants of only 10 shops paid rent regularly while 15 shops were vacant. “Those running the remaining 15 shops have kept the rent pending for several months, some even for up to four years,” an official from Ambattur zone said.

Kamala Kannan, a licence inspector with GCC’s Ambattur zone, said the shopkeepers together owed about ₹20 lakh to the civic body. “Nine of these 15 shops that failed to clear the dues despite several warnings were sealed today,” he said.

Pointing out that those running these shops had taken it on rent when Ambattur was a municipality before its merger with the GCC, he said the monthly rent of these shops was around ₹5,000. Highlighting that the action on Wednesday was taken as per instructions of senior officials, he said all the 106 such shops in Ambattur zone were checked to trace defaulters.

“We will soon be initiating action against some shops in Padi and Ram Nagar,” he said.

A senior official from GCC said officials across the city had been asked to take stringent action against those who defaulted on rent for a long time.