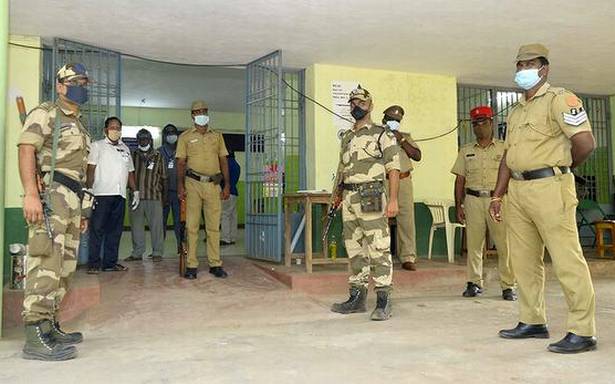 The counting centres at the Women’s Polytechnic, Motilal Nehru Government Polytechnic and Tagore Government Arts and Science College at Lawspet have been brought under the surveillance of 53 Closed Circuit Television cameras, Nodal Officer (Counting) T. Sudhakar has said.

Mr. Sudhakar, in a release on Saturday, said all the counting centres, where the electronic voting machines were stored, were under the surveillance of CCTV cameras.

The outer perimeter of the counting centre was guarded by the territorial police, the middle perimeter by the India Reserve Police battalion and the inner perimeter by the Central Reserve Police Force. As many as 60 police personnel on shift had been deployed for security of the strong rooms, he said. One Executive Magistrate had been posted on duty at each of the centres on shift. Candidates or their agents have been permitted to visit the strong rooms and check the security arrangements, he said.