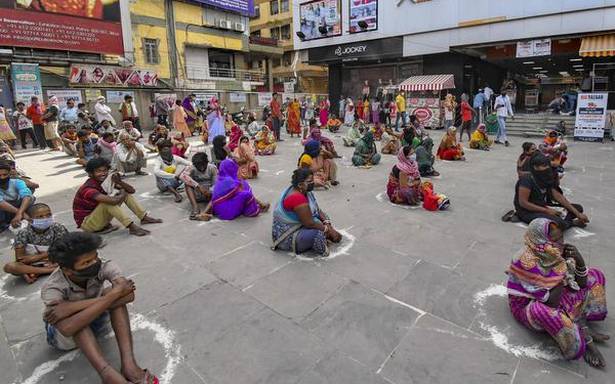 The impact of the first wave of COVID-19 pandemic in rural Bihar households was “pervasive and severe with many households receiving only a fraction of the promised support at a time when the existing safety nets were also compromised to a lesser or greater extent”, a study has said.

“78% of ration cardholders received less that the announced 5 kg of free rice or wheat per person per month; 91% received less than 1 kg of free pulses per person per month. Similarly 52% of households were not eligible for free cooking gas cylinders for three months under the Prime Minister Ujjawala Yojna and 31% of households had no women Jan Dhan accounts to receive cash transfers,” it said.

The study was jointly conducted by the Centre for Development Economics and Sustainability (CDES, Monash University, Australia) and the Institute for Human Development (IHD, New Delhi) to document how the first wave of the pandemic affected people’s lives and livelihoods in seven districts of rural Bihar.

Data was collected for the study “Lives and Livelihoods in the wake of COVID-19 pandemic in rural Bihar” from October 17, 2020, to January 10, 2021, from a sample of 1,613 households in 12 villages across seven districts of Bihar: Gaya, Gopalganj, Madhubani, Nalanda, Araria, Purnia and Rohtas. “The focus of the study was to know how the COVID-19 crisis impacted the livelihoods and lives of rural households in Bihar and how far the announced government support translated into support on the ground,” said Gaurav Datt, Swati Dutta and Sunil Kumar Mishra who conducted the study.

“Casual workers had lost nine days of employment per month, on average since the beginning of the COVID-19 crisis and 41% of pregnant women reported being unable to avail health checkups in that period,” the study said.

“About 18% of households had no ration cards and were unable to receive the additional free ration of rice, wheat and pulses for eight months. 19% of eligible households received no free cooking gas cylinders and around 30% households with women Jan Dhan accounts received less than the announced amount of cash transfer, about 22% received only a single instalment of 5,000 instead of promised three instalments,” according to the study.

“Only 51% of the cardholding households received their full normal PDS ration since coronavirus,” it added.

“The livelihood impact of COVID-19 was pervasive as 94% of households experienced at least some impact on their livelihoods”, the study said.

“The most widely affected livelihood activities were casual and migrant labour. Among those participating in migrant labour 94% were affected. On average, workers engaged in casual labour lost about nine days of work per month since coronavirus. However, MGNREGA work was least affected but MGNREGA employment was decreased on average by one day per month,” it said while adding, “more than half of migrant workers returned to the native village with the disruption of work in destination areas and on average spent ₹3,000 on their return journey”.

“Of those who stayed in the destination area, about nine out of 10 lost days of work and reduced their remittances back home and those returning to their village, the typical worker lost more than 40 days of work and less than two-thirds of the returnees found alternative part-time work around the village. Many of them went back to destination areas after spending an average (median) of 149 days in the village and about one-fifth of them had not resumed work there at the time of the survey,” the study said. “About one-fifth of the households with a regular salaried job in the private sector too experienced job losses.”

“About 28% of households with children under 24 months missed their children’s immunisation since corona, 41% of households with pregnant or lactating women reported being unable to avail of the ante and post-natal checkups”, the study report revealed.