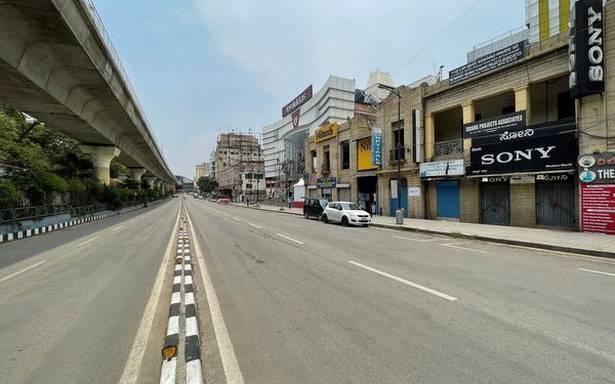 Patients, their attendants and those wanting to take vaccines will not be stopped

On Friday evening, the city slowly started shutting down for the weekend curfew, which will remain in force till Monday morning, after which a semi-lockdown on weekdays will continue. Grocery stores and those selling food items will remain open only from a 6 A.M. – 10 A.M. Pharmacies will remain open all through the day while restaurants will provide only takeaways. The government has urged people to remain indoors and opt for home delivery wherever possible.

In keeping with Home Minister Basavaraj Bommai’s description of the weekend curfew as ‘similar to last year’s lockdown’, severe restrictions will be imposed on the movement of people; all non-essential travel is banned.

Bengaluru City Police stated that it will block all flyovers and restrict entry of vehicles. “This time we have not issued any passes. Our personnel will be on the streets and we will allow only essential and emergency travel,” said Commissioner Kamal Pant, adding that violators will be strictly dealt with and vehicles seized.

Patients, their attendants and those wanting to take vaccines are allowed to travel. Marriages with an upper limit of 50 guests and funerals with a maximum gathering of 20 individuals will be allowed

Namma Metro will not run on the weekends till May 4. In a press release on Friday, Bangalore Metro Rail Corporation Limited (BMRCL) announced the cancellation of train services. On weekdays, services will start as usual at 7 a.m. However, last trains from the terminal stations – Nagasandra, Silk Institute, Mysuru Road and Baiyappanahalli – will depart at 7.30 p.m. “The last services will have connecting trains at Kempegowda Metro Station to another line,” stated BMRCL in a press release.

The Bangalore Metropolitan Transport Corporation (BMTC) has curtailed bus services during weekends. Managing Director C. Shikha told The Hindu that only around 500 buses will be operated to cater the needs of those carrying out essential services and people visiting hospitals.

The Karnataka government has allowed long-distance travel by train, bus and air. Taxis and private vehicles to and from these transport hubs will be allowed to ply on production of valid travel documents of passengers.

Karnataka State Road Transport Corporation has instructed depot managers to run buses as per demand. “We do not anticipate much demand due to the weekend curfew. We will run both inter-State and intra-State services depending on online bookings and demand,” said an official.