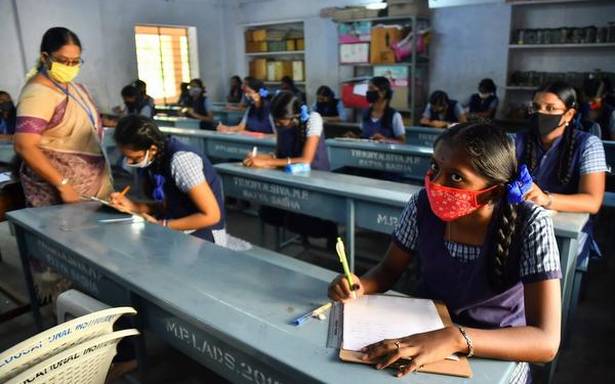 States given time till Tuesday to discuss options.

A broad decision has been taken that Class 12 board examinations must be held, but with fewer subjects, and a possible reduction in duration and staggered schedules, according to senior officials who attended Sunday’s online consultation of State and Central Ministers.

Defence Minister Rajnath Singh, who chaired the meeting, has given States three more days to discuss their options before a final decision is taken, asking them to respond in writing by Tuesday.

A vocal section of parents and students have been demanding that the exams be cancelled, due to the second wave of the COVID-19 pandemic.

The Centre recommended that examinations only be held in about 20 major subjects. It offered two options, one to hold the regular three hour examinations, or to halve the duration of the examination using a question paper with only multiple choice or short answer questions, officials said.

Delhi and Maharashtra representatives wanted vaccination of students and teachers to be done before the exams are held. Maharashtra’s Education Minister also said further consultations would be held by the State Chief Minister before coming to a position.

Several States wished for the option to delay their examinations by several months, if needed. Kerala and Bihar have already held their State board examinations. Chhattisgarh has announced an open book examination to start on June 1, but Central officials warned that the validity of the results may not be accepted by universities.

“We cannot play with the lives of our children by making them sit for examinations. The only way forward is to vaccinate all students at the earliest,” said Delhi Chief Minister Manish Sisodia, speaking at a press conference after the meeting. He said students should be graded based on historical references of the past few years and be given an option of taking the examination at a later date.

Delayed NEET on the cards

Apart from the 14 lakh CBSE students registered to appear for Class 12 examinations, lakhs more are registered under the various State boards of education, as well as the Council for the Indian School Certificate Examinations. More than 1.1 crore students join higher education courses in the country every year, relying largely on their Class 12 board results for admission.

With regard to professional entrance examinations such as NEET and JEE, the Centre is prepared to hold them as late as September, as was done last year, in order to give time for Class 12 exams to be completed, according to a senior official. Tamil Nadu expressed its strong opposition to holding the NEET medical entrance examination at all. Most university admissions are likely to be delayed till November once again.