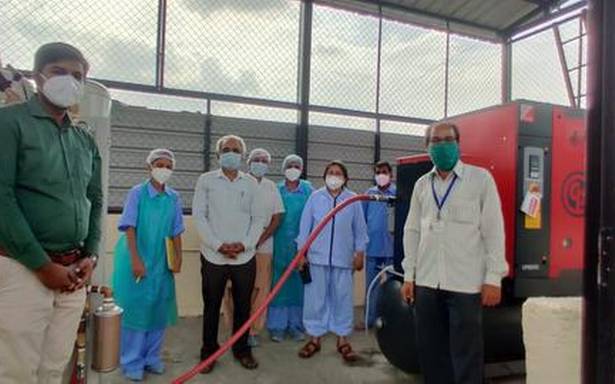 In a bid to shore up the rural health infrastructure and to prevent an oxygen deficit crisis in a possible third wave of COVID-19, the Pune rural administration has made medical oxygen generation plants operational at five sub-district hospitals (SDHs) in the district. Plans are afoot to make such plants functional in 24 other rural hospitals.

The objective, according to Pune Zilla Parishad chief executive officer, would be to make all State-run hospitals in rural Pune self-sufficient in oxygen.

The move assumes significance after Chief Minister Uddhav Thackeray on Sunday announced a “corona-free village” drive to check the contagion in rural areas.

“The lethal second wave has been characterised by an acute oxygen shortage. Sourcing it through private suppliers is a problematic process and hence, we are installing plants in hospitals so as to ensure a smooth supply of oxygen in the event there is a recrudescence of the virus and demand shoots up,” Mr. Prasad said.

A little more than three weeks ago, the district was the worst-hit in India, reporting an average daily surge of 10,000 cases and 150 fatalities.

While the surge in Pune’s rural areas have yet to show a notable fall, the district administration has nevertheless been proactive and innovative in combating the scourge. A strategy, administration authorities said, had been to use corporate social responsibility (CSR) effectively and bypass the usual, cumbersome government procurement methods.

“This has ensured advance payments to suppliers who in turn have ensured quick supply of vital equipment and supplies during the crisis. So, in the absence of clear government procurement rules or when the prices [for essential equipment] have been high, the Pune district administration has reached out to several manufacturing companies in the district who have worked wonders through their respective CSR arms,” Mr. Prasad said.

Officials claimed that the maximum amount of oxygen that was consumed in any district in India was in Pune at the peak of the second wave of the pandemic. Sources estimated that around 410 metric tonnes of oxygen was consumed on a single day in April when the district was reporting record single-day jumps of anything between 11,000-12,000 cases.

Showing foresight, the then district collector, Nawal Kishore Ram, had ensured last year itself that all the beds in government-run facilities were connected to oxygen pipelines. A bay that could cater to at least 26 jumbo cylinders was installed at each of the 29 hospitals in the district while liquid oxygen tanks had been installed in the three SDHs of Bhor, Manchar and Baramati.

Divisional Commissioner Saurabh Rao had earlier said that the plan was for 100 government hospitals in Pune division comprising the districts of Pune, Satara, Kolhapur, Sangli and Solapur to get oxygen plants by the end of July.

“Owing to our unique collaboration with corporates and through their CSR initiatives, we have managed to procure a lot of pandemic essentials speedily at fairly reasonable rates. All five medical oxygen generators that we installed recently were provided by the CSR arm of Bajaj Auto Ltd.,” Mr. Prasad said.

Pankaj Ballabh, GM-CSR, Bajaj Auto Ltd., said that right from the start of the pandemic, the firm’s focus had been on the rural upgradation in the SDHs and the primary health centres.

“Besides the installation of oxygen plants, we have helped set up a tele-ICU facility in rural Manchar,” he said.