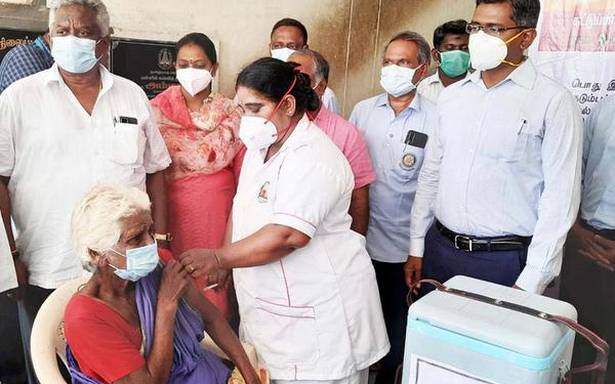 The drive was organised at 529 sites across the district

Residents of Kallakurichi district on Sunday turned up in large numbers at the mass vaccination camp organised by the district administration at about 529 sites across the district. Collector P.N. Sridhar inaugurated the camp at the Regional Transport Office in Kallakurichi.

According to a release, the administration had geared up to administer about 76,374 doses during the mega vaccination camp. The camps, which began around 7 a.m., were scheduled to go on till 7 p.m. However, in many places, they ended early due to exhausting their supply of doses. As many as 48,733 persons were vaccinated till 5.30 p.m. Of them, as many as 41,892 were administered the first dose while 6,841 received the second.

Official sources said there was no wastage of doses. On Sunday, as many as 22,870 persons aged between 18 and 44 years received the first dose, followed by 19,022 in the age group of 45 to 59 years. As many as 4,122 in the age group of 18 to 44 years and 2,719 above 45 years received the second dose. In Villupuram district, Minister for Minorities Welfare and Non-Resident Tamils Welfare K.S. Masthan inaugurated the mass vaccination camp at the Government Arts and Science College in Tindivanam. As many as 81,105 persons were administered the vaccine at 1,150 camps in the district.