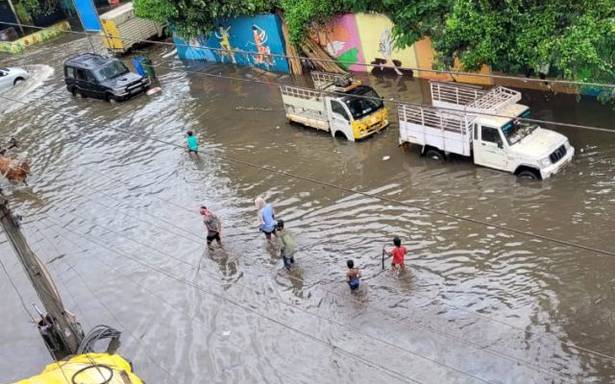 Fishermen have been advised not to venture into the sea along and off AP and Yanam coasts on Monday.

: After Cyclone Gulab made its landfall about 20 km north of Kalingapatnam in Andhra Pradesh around 8 p.m on September 26 night, Visakhapatnam city has been receiving copious rains.

From a steady drizzle that began on Sunday morning, heavy rain has been lashing the city since late in the night.

Meanwhile, the cyclone Gulab has weakened into a deep depression over north Andhra and adjoining south Odisha coast.

Strong winds with a speed of 40 to 50 km/hr, gusting to 60 km/hr are likely along and off north coastal AP, according to the Cyclone Warning Centre, Visakhapatnam.

Motorists driving through the waterlogged Beach Road, as the city experienced heavy rain under the influence of cyclone Gulab, in Visakhapatnam on Sunday night, Sep 26, | Photo Credit: K.R. Deepak

Fishermen have been advised not to venture into the sea along and off AP and Yanam coasts on Monday.

A few areas, especially the north -eastern part of Visakhapatnam city such as the Beach Road, Bheemunipatnam, PM Palem and Kailasagiri have also been witnessing gusts, which resulted in the uprooting of a number of avenue trees.

The average rainfall received till about 5 a.m. on Monday, as per the CM’s dashboard, is between 150 and 200 mm.

Many low lying areas like Gnanapuram, Velamapeta, Gajuwaka, Thatichetlapalem and Kancharapalem, were flooded, and police officials were seen diverting the traffic.

Rain water entered some of the houses at Pedagantyada HB Colony and in Gnanapuram.

As per the police, fortunately no untoward incidents were reported from any part of the city. Almost all the parts of the city did not have power supply since late Sunday night.

People residing in hillocks have spent a sleepless night due to fear of landslides. Many families living in those areas moved down to their friends and relatives places, for safety.

In an alert message, GVMC Commissioner G. Srijana through social media platforms, facilitated control room numbers and appealed to people to contact in case of any need for assistance.