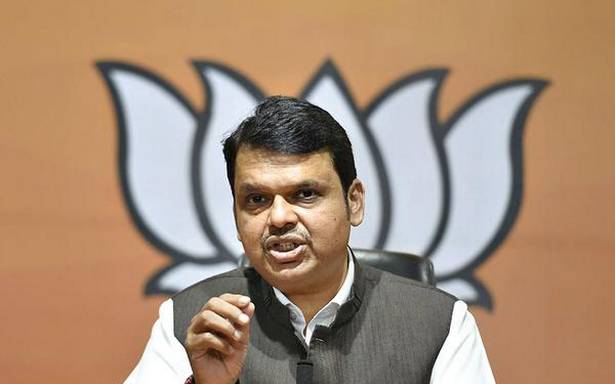 Stating that the Centre would give aid to all eight States, including Maharashtra, which had been hit by Cyclone Tauktae, Bharatiya Janata Party (BJP) Leader of Opposition Devendra Fadnavis on Thursday accused the Uddhav Thackeray-led Maha Vikas Aghadi (MVA) government of needlessly and deliberately politicising the relief issue.

Mr. Fadnavis, who is on a three-day tour of the Konkan region, which was ravaged by the cyclone, also alleged that the State government had yet to complete the relief and rehabilitation of citizens who had been afflicted in June last year.

“Instead of pointing fingers at the Centre each time something happens, I urge the State government to take its own relief efforts seriously. They [the MVA] have to ensure whether their announcements are being implemented on ground…I find that several people who were afflicted by Cyclone Nisarga have not yet received compensation,” the former Chief Minister said in Mahad in Raigad district.

He was reacting to statements made by some MVA leaders that while Prime Minister Narendra Modi had personally visited and declared help for Gujarat, Maharashtra was being given step-motherly treatment and ignored.

Raigad, along with Ratnagiri and Sindhudurg districts in the Konkan have been the worst-hit in Maharashtra, with the cyclone damaging around 10,000 houses, 5,000 hectares of fruits and cropland, nearly 200 school buildings, and scores of medical establishments.

Mr. Fadnavis said that in a release issued on Wednesday, the Central government had clearly stated that it would provide assistance to all the eight States affected by the cyclone.

“The landfall of the cyclone happened in Gujarat which bore the brunt of its onslaught. As many as 45 people died on the spot and a large number of villages have suffered destruction. So, on Wednesday, the Prime Minister visited the spot, inspected the damage, and declared help. It was also clearly mentioned in the official press note that all eight States hit by the cyclone including Tamil Nadu, Kerala, Karnataka, Goa, Maharashtra and Rajasthan and two Union Territories besides Gujarat would get help,” Mr. Fadnavis said.

Rebuking Mr. Thackeray’s government, he said that no other State had complained of the Centre not intending to help them.

“Everyone has read that the Central government will help all the States. Now, neither Kerala nor Tamil Nadu is a BJP-ruled State or if you think differently, Goa and Karnataka are BJP-ruled states. However, the Prime Minister visited and announced help in Gujarat as it was the worst-hit of all the States. Maharashtra, too, will get its share. However, politics is being played consciously in this regard,” he said.

Mr. Fadnavis said that Maharashtra must immediately deploy aid from the State Disaster Response Fund (SDRF) to succor those affected by the cyclone.

“The SDRF is replenished by the Centre. The State government knows this, but yet is deliberately indulging in a blame game,” he alleged.

State Energy Minister Nitin Raut, however, insisted that Mr. Modi had turned his back on Maharashtra while making his native Gujarat the first priority.

“While the damage undoubtedly is maximum in Gujarat, Maharashtra, too, has suffered. The Prime Minister should have asked the Chief Minister for estimates regarding the damage suffered… The Opposition, instead of politicking, must have requested from the Centre maximum compensation for the State,” Mr. Raut said.

Meanwhile, State Relief and Rehabilitation Minister Vijay Wadettiwar, who commenced his own tour on Thursday, said that a package would be announced after Mr. Thackeray had inspected the afflicted areas on Friday.

Mr. Wadettiwar further rubbished the BJP’s claims of those afflicted by Cyclone Nisarga not being compensated till now.

“It is nonsense to say those hit by Nisarga have not received anything…our per hectare compensation for the loss of fruits and cropland was far higher than that announced by the Centre. We have not left the populace of Konkan to the winds…Once the Chief minister’s tour is over, we will announce a package for those affected by Cyclone Tauktae,” he said.