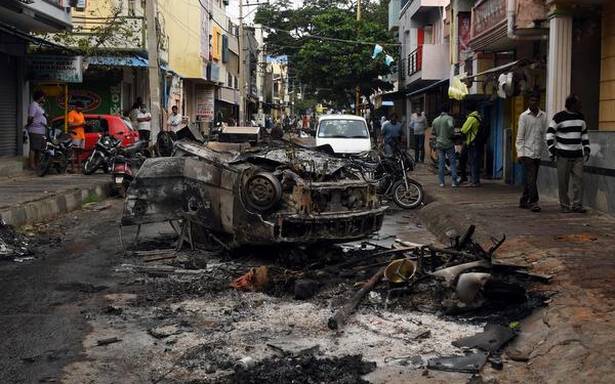 Claims Commissioner cites lack of infrastructure to discharge his duties

The State government on Monday faced an embarrassment before the Karnataka High Court as H.S. Kempanna, a retired judge of the court, complained that he has not been provided with sufficient infrastructure to discharge his duties as Claims Commissioner to assesses the damage caused to properties during the violence in D.J. Halli-K.G. Halli on August 11, 2020.

Interestingly, the High Court had appointed Mr. Kempanna as the Claims Commissioner on a batch of PIL petitions, including one filed by the State government on August 19, seeking appointment of a Commissioner to assess the damage in terms of the Supreme Court’s guidelines to assess and recover damages caused during such incidents.

A division bench comprising Chief Justice Abhay Shreeniwas Oka and Justice Sachin Shankar Magadum, which took note of the letter written by Mr. Kempanna, observed that the government had “miserably failed” in providing infrastructure due to “gross negligence” by officials despite several directions issued by the court since October 2020 in this regard.

Orally observing that “it is unfortunate that a retired judge was forced to write a letter”, the bench directed the Chief Secretary to immediately meet Mr. Kempanna, discuss the infrastructure required, and ensure that the Commission would commence effective functioning from January 18.

In his letter addressed to the Registrar (Judicial), Mr. Kempanna had said that besides not providing sufficient infrastructure, the government has not sent various notifications issued on appointment of staff, etc., while pointing out the requirement for creation of certain posts, like secretary and section officer, for discharging his duties as Claims Commissioner.