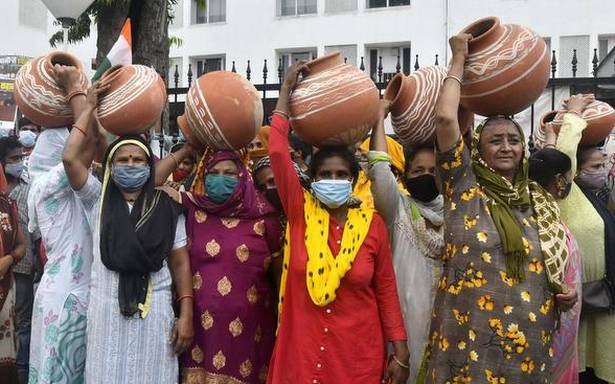 As water production by the Delhi Jal Board rose to an "all time high" of 955 million gallon per day on Sunday, Chief Minister Arvind Kejriwal said his government is doing its best to provide water to all in the city.

Several parts of the city have been facing water crisis in the past weeks with the opposition BJP and Congress slamming the AAP government and staging protests including at the chief minister’s residence.

"Govt is doing its best to provide water to all. Our engineers are working 24×7 against all odds," Mr. Kejriwal tweeted.

Also read | ‘Now, all households will get clean drinking water’

"I’m pleased to inform that today Delhi’s water production by @DelhiJalBoard is at an all time high of 955 MGD against the usual 910 MGD. Due to sufficient availability of raw water in River Yamuna as well engineering solutions, we have managed to push our optimum levels," Mr. Chadha said in a tweet.

He said on Friday that 16000 Cusec water was released by Haryana three days ago, that had reached Delhi and the water treatment plants in the capital were operating at optimum levels.

Water levels of the Yamuna at the Wazirabad Barrage had hit the lowest mark in 56 years on Monday, with Haryana withholding Delhi’s share of water, he had said earlier. The DJB had on last Sunday moved the Supreme Court, seeking directions to Haryana to release the capital’s share of water.

The utility supplies 935 MGD of water to city residents against the demand of 1,150 MGD.