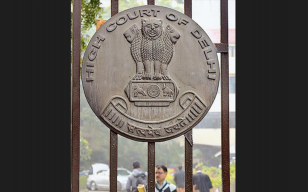 The Delhi High Court has refrained from entertaining a lawsuit filed by a man against an online self-published book titled Muhammad, which allegedly makes derogatory statements against Islam, the Holy Quran and Prophet Mohammed. The court noted that the litigant failed to show an infringement of his personal legal right.

Justice Sanjeev Narula was of the view that “in the absence of disclosure of infringement of any legal right, the plaintiff’s prayer seeking injunction and damages on account of being offended or aggrieved by the contents of a book – which allegedly is hurtful to his religious sentiments – would not give him any right to approach this court by way of the present suit”.

Qamar Hasnain, in his plea, had sought to recall all copies of the book purportedly authored by Syed Waseem Rizvi and to destroy all copies sold or unsold. Mr. Hasnain, who claimed to be a religious scholar and a concerned follower of Islam, also sought a direction to remove all objectionable posts and comments related to the book from their respective social media platforms. He contended that the contents of the book were offensive, hateful and distressing to even a casual reader, let alone a follower of Islam or an admirer of Prophet Muhammad.

The court, however, questioned the maintainability of the plea in which the pleadings was “in the capacity of a representative action”.

Justice Narula said, “A representative suit for a public nuisance or other wrongful acts affecting, or likely to affect the public, has to fulfil the requirements of law and it needs to be specifically averred”.

“For such suits, amongst other requirements as provided under Section 91 of CPC (Code of Civil Procedure), a suit if not filed by the Advocate General, has to be filed by two or more persons with the leave of the court,” the judge elucidated.

“Under this provision, a party can perhaps approach the court for an illegal act which in its nature tends to cause injury of public at large. However, for a representative action, it is indispensable that reliance is placed upon such provisions of the statute. No such pleadings are found in the instant case,” the court remarked.

Justice Narula, however, clarified that the court has not gone into the merits of the case nor contents of the book and that Mr. Hasnain was “entitled to exercise all his rights and remedies under the law”.