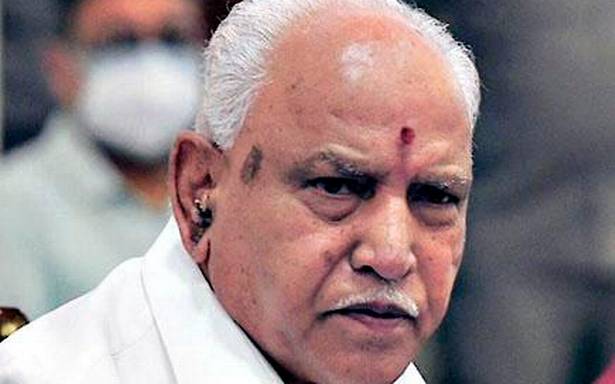 In a serious setback to Chief Minister B.S. Yediyurappa, a Special Court on Saturday ordered further investigation against him while terming as “defective” the closure report filed by the Lokayukta police giving him a clean chit in the case of alleged corruption in illegal denotification of land in 2006 when he was serving as the Deputy Chief Minister.

“The investigation carried out by the investigation officer (IO) appears to be ineffective, incomplete, defective, and does not inspire the confidence of this court,” said Shridhar Gopalakrishna Bhat, judge of the Special Court to deal with criminal cases related to MPs and MLAs in Karnataka.

While rejecting the ‘B’ report, the court observed that “…facts emerging from the ‘B’ report would prima facie indicate that the IO (M.G. Shankaranarayana, Deputy Superintendent of Police) did not conduct the investigation properly as required on the matter referred for investigation so as to thrash out the underlying truth.”

The court also observed that “it appears that even the Additional Director General of Police (Lokayukta) had also not properly considered the final report while approving it to be submitted before the court.”

“The material collected demonstrates that how the IO has ignored the material facts during investigation, and exhibited his casual approach in the matter of investigation. The entire investigation made by the IO is in perfunctory manner and against the approach of the prudent person,” the Court said.

The court pointed out that the IO had not collected any material to assess whether Mr. Yediyurappa had abused his official position, or obtained any pecuniary advantage or valuable thing for himself or for any other persons by illegal or corrupt means, or the de-notification was not for any public interest. The Special Court, while ordering a probe in 2015, had specifically directed the Lokayukta police to investigate into these aspects.

“It appears to this court that either IO has not considered the contents of allegations made against the present accused in the complaint or deliberately mixed up unconnected matters for reasons best known to him,” the court said, while pointing out the IO collected voluminous documents unconnected to the denotification of land dated June 21, 2006.

The Court described as “un-acceptable and untrustworthy” the opinion of the IO that “no offence under the provisions of the Prevention of Corruption Act 1988 appears to have been committed by Mr. Yediyurappa.”

The Special Court on February 18, 2015, had ordered the Lokayukta police to investigate the complaint lodged in 2013 by Vasudeva Reddy of Belandur, Bengaluru. He had complained about illegality and corruption by Mr. Yediyurappa, and then Minister R.V. Deshpande in connection with denotification of several acres of lands in Bellandur and Devarabisanahalli villages notified for IT parks.