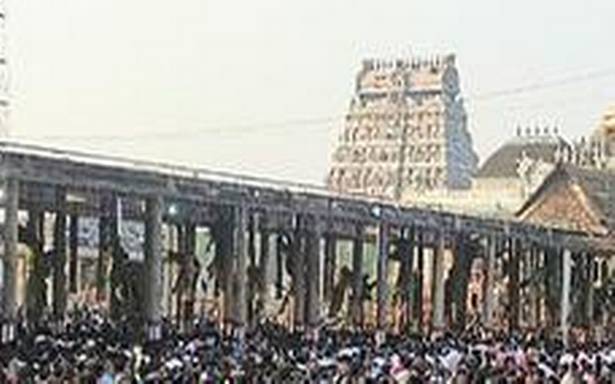 A large number of devotees thronged Sri Natarajar temple in Chidambaram on Monday on the occasion of ‘Arudra Darshan’ as the ten-day event drew to a close.

People from the neighbouring districts and across the State visited the historic temple and offered worship, after getting a glimpse of the presiding deity during the annual event.

Amid chanting of hymns, Lord Natarajar in a cosmic dance pose and Goddess Sivagamasundari were taken out in a procession on a palanquin at 6 p.m. from the thousand-pillar mandapam to the sanctum sanctorum where special pujas were performed.

This is one of the two important annual 10-day festivals when Lord Natarajar is taken out in procession through the four Car Streets in the temple town, the other being ‘Aani Thirumanjanam’.

The Cuddalore district police had thrown a huge security cordon deploying more than 900 police personnel to regulate the crowd. The district administration had declared a local holiday on Monday in view of the festival.