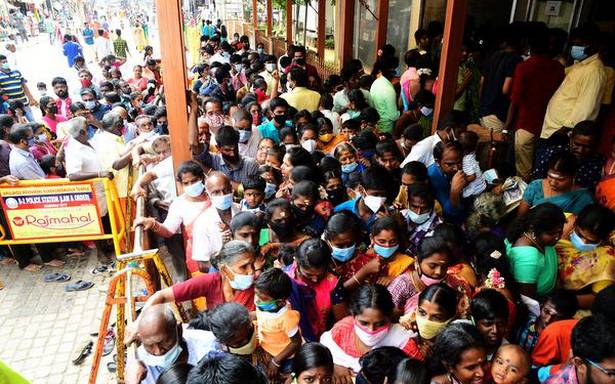 Crowd management goes for a toss

With the start of the New Year, devotees from far and near thronged the famous Sri Meenakshi Sundareswarar Temple on Saturday morning.

Throwing the covid-19 guidelines in the air, a majority of the visiting public were keen on making entry into the shrine in a hurried way. Physical distancing was not at all maintained at the screening point at the Eastern Tower of the temple which was packed at 11 a.m. when The Hindu photographer was at the spot.

The temple officials, who were present in skeleton strength, were more pre-occupied in receiving the self-appointed VVIPs and ‘senior’ officers from multiple departments.

“As the officers were entering the temple with their family members, the devotees were stopped by the police at the screening queue,” a tourist guide said.

Ayyappa devotees too, who had come from other States and districts, found it tough to gain entry into the temple as the crowd was overflowing along the Chitirai Street. There was chaos at the footwear deposit counters.

Many devotees from Kerala were questioned for not wearing face masks. When some among them pointed out that the local people also were not wearing the masks, a wordy altercation was witnessed causing uneasy moments.

Police officers and a few constables on duty were keen on ensuring that their seniors had a smooth passage on arrival and had no issues in having darshan at the ‘sannidhi’ of the presiding deity. The Bhattars in the temple were also not wearing masks, some regulars who visited the shrine claimed.

When contacted, a HR&CE official requesting anonymity said that they had put up boards at vantage locations on the guidelines of the Tamil Nadu government on wearing face masks properly, to maintain physical distancing and use sanitizers.

It may be noted that the Meenakshi Temple administration had announced last month that only those with covid-19 vaccination certificates would be permitted, but withdrew the announcement on the same day without giving reasons.

In other major temples too here, the crowd management went for a toss.

During the early hours alone the crowd was thin. From 8 a.m. onwards, devotees arrived in large numbers at the Koodal Alagar Temple, Subramanian Swami Temple at Tirupparankundram and Prasanna Venkatachalapathy Temple at Tallakulam.

There were neither sufficient police personnel to regulate nor the temple staff had made arrangements to manage the visitors.

In a separate function held at the Government Rajaji Hospital, Dean Rathnavel said that Omicron was on the rise in many parts of the globe. It was high time people came out of their houses adhering to the covid-19 norms.